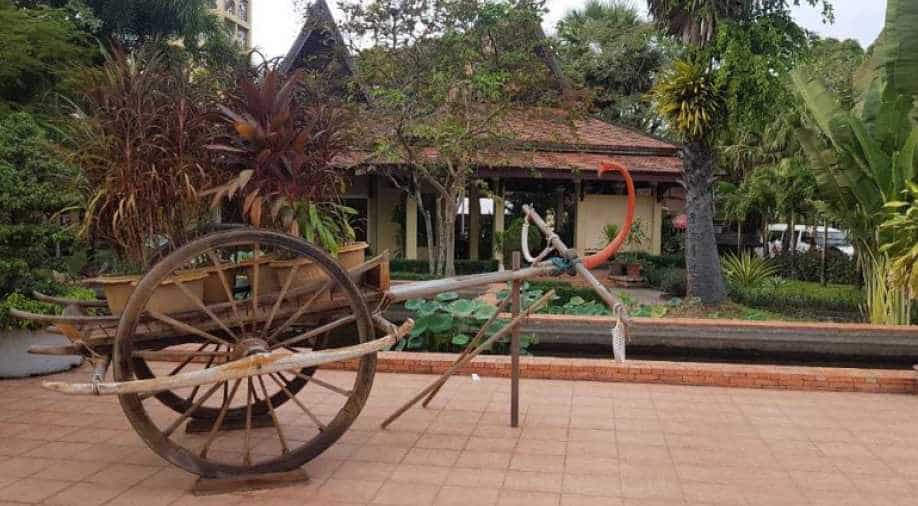 The Chinese today dominate the landscape of Angor Vat.

My first day in Cambodia was an eye-opener since the hospitality industry has deep roots and the country has done well after the war, I assumed that some things are a given about a society. But what meets the eye is not the truth. The glitzy hotels and the tourist-oriented sector can hide a lot of simple facts.

I wanted to swim and realized that I have left the trunk back in Delhi. In order to make a quick buy, I asked my guide to take me to any shop for a swimming trunk. The hotel owners too informed me that it would be available in the city. When I asked the guide about the shop he replied,"it would be little difficult. People in Cambodia like to take bath in their homes. They do not go to 5-star hotels for a bath.” I said,"boss, swimming is an exercise.” He retorted,"even the rich do not have swimming pools in their homes and they have to go to these hotels for a dip.”

He told me that Cambodia is not a rich country. I decided to hunt for swimming wear myself. It took me half an hour but I was able to locate the shop. But what Chandra told me is a reality which is unseen behind the glitz of a booming tourist economy. It feeds the poor and helps the economy, but massive profits remain in the hands of few.

What is the indicator of rise of a big power? There are many factors. GDP is one but there are many ways one can evaluate the power of a foreign power. In India, if one travels through the Buddhist circuit in Siddharthnagar, Maharajganj in Uttar Pradesh and Gaya in Bihar, one would understand that Japanese hotels and eateries rule the roost.

You would immediately know the nationality of the five-star tourists. It is similar in Cambodia. It was dominated by the Koreans earlier. Siem Reap had a number of Korean food-joints but today they are being overtaken by the Chinese joints.

The Chinese today dominate the landscape of Angkor Wat. It was the Koreans earlier. Many Korean eateries have closed down and new Chinese eateries have opened. My guide told me that the Chinese overtook the Koreans couple of years back. Makes me remember Goa. It has been overrun by Russians. What do you do when the mantra is globalisation.

Cambodia is a great country. It is a beautiful country but still needs to prepare its hospitality industry for vegetarians. When my wife Nistula Hebbar in a rated hotel requested for vegetarian food, the reply was: “Do not worry, it is only fish.” I had to hunt for a European eatery. She had French onion soup and stir-fried vegetables in Cambodia and I had tenderloin. Mind you, it was not Sirloin.