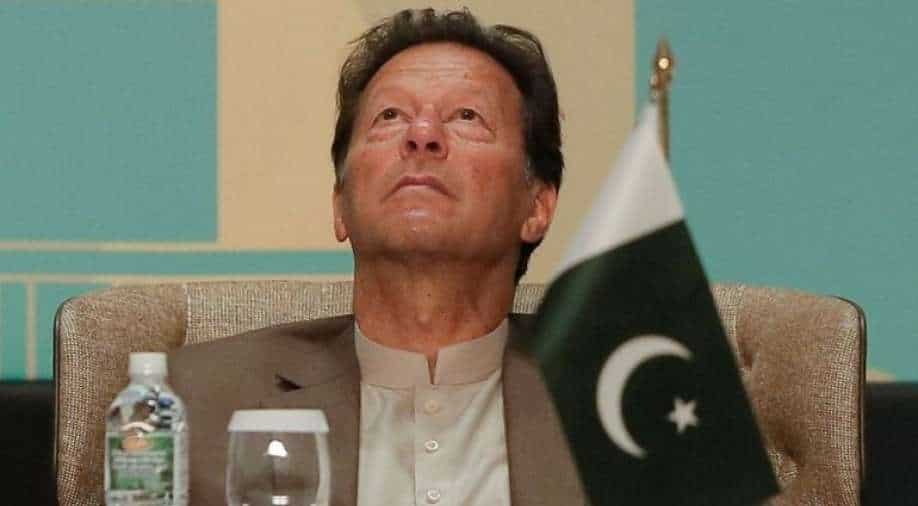 Khan, 69, is heading a coalition government and he can be removed if some of the partners decide to switch sides. Photograph:( Reuters )

Pakistan Prime Minister Imran Khan commences his high-profile visit to China on February 3 which is seen as much-hyped and high in optics. This is obviously to signal to Beijing that Pakistan holds China in a very high esteem and is always at its service howsoever servile it might look. In this backdrop of bilateral developments connected to the visit, Pakistan government hopes that Imran Khan's visit would reinvigorate the China Pakistan Economic Corridor (CPEC). And, to push the CPEC agenda which is the principal focus of Imran Khan’s trip, 21 different sectors have been already identified to be specifically discussed with the Chinese leadership. Further, the Pakistani delegation will impress upon its Chinese counterparts that Special Economic Zones (SEZs) have been created to give thrust on trade, information, agriculture and relocation of Chinese investments in Pakistan.

During his much-publicised Beijing visit, Imran Khan is also scheduled to hold one to one talk with President Xi Jinping and Prime Minister Li Keqiang other than participating in the ceremonies connected to the opening of the Winter Olympics in China. Meanwhile, informed sources in the Pakistan establishment confide that Imran khan is upbeat in trying to meet President Putin of Russia too on the sidelines of his meeting with the Chinese big wigs.

This apart, Imran Khan will is also slated to hold an entire gamut of bilateral talks with China but, as already stated, will go out of the way to assure the Chinese leaders at the helm that China should not be deterred by a handful of terror acts targeting the Chinese personnel and projects in Pakistan to instill a kind of sense of security and confidence so that investments are not discouraged. It may be recalled that not so long-ago terror offensives had claimed 10 Chinese lives (Dasu) and rattled the Chinese project managers fearing being violently affected. Other than this, Khan is also thought to be walking an extra mile trying to tell the Chinese Who’s Who that it’s wrong to assume that he or his party Pakistan Tehrik-e-Insaaf (PTI) has not done anything worthwhile in the last three-and-a-half years of rule to carry forward the CPEC. Whatever, the Chinese are not easily impressed so the task at hand is onerous.

Significantly, Pakistan would not like to lose this opportunity of prevailing over the Chinese to maintain a steady flow of investments in Pakistan for a twin set of objectives: a) It will help reinforce ties between China and Pakistan particularly in view of a downslide in the US-Pak ties with India vigorously drawn towards the US and the Quad initiative. Pakistan is almost friendless today except for China and Turkey and it has to save its failing economy and end living in isolation. (FATF conditions and the global impression that Pakistan is a pariah state for its abetment to terror, needs to be internationally dispelled). So, under the circumstances, China is the safest bet;  b) a renewed relationship with China, by Pakistani perceptions, will help Pakistan to counter India with whom Pakistan has hitherto failed to address bilateral problems either militarily, or even diplomatically.

Pakistan’s importance attached to Imran Khan's high flying visit to Beijing is also evident by the fact that in run up to the visit, the PM held a high-level meeting (February 2 - Islamabad) of the Pakistan establishment comprising almost all the federal ministers and notably the chiefs of intelligence and the armed forces. Participation of the military component of the Pakistani dispensation at the meeting is not ordinary. This shows either the military doesn’t want to be seen aloof from the civilian mainstream in an important event like the China visit or Imran Khan, contrary to his occasional contradictory statements, is still under the military thumb for all the crucial happenings in the country. Either way, military continues to make its presence felt proving its relevance in internal and external matters.  This aspect needs a close watch as Pakistan is afflicted with multiple domestic challenges including a political tumult with opposition parties in collusion to target the Imran Khan govt including of a call given by the Progressive Democratic Movement (PDM) for a crucial march on March 23 calling for Imran Khan’s ouster. All these factors must be weighing in the mind of Imran Khan while he is on way to Beijing.