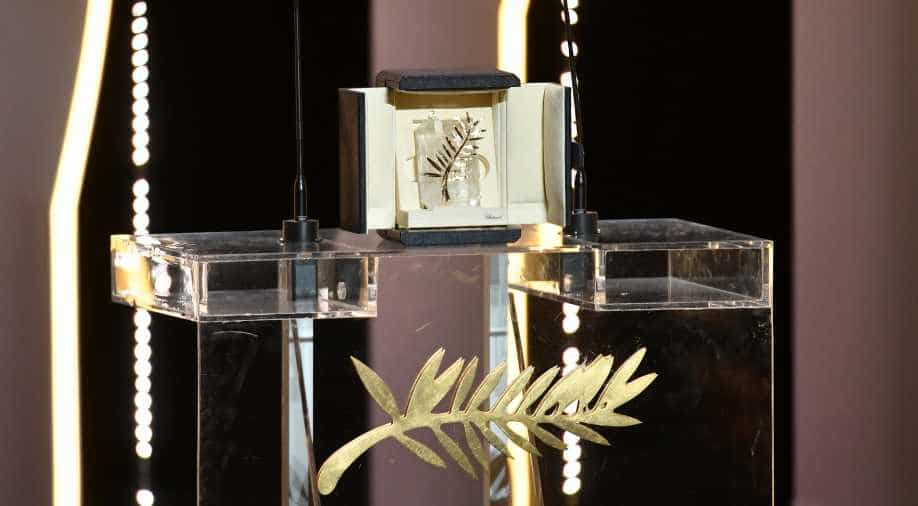 The Palme d'Or is pictured before being presented. Photograph:( AFP )

Here are the winners from the 2017 Cannes film festival, as chosen Sunday by a star-studded jury led by Spanish director Pedro Almodovar.

Swedish film "The Square", a dark satire of the contemporary art world, was the surprise winner of the top Palme d'Or prize at the world's biggest film festival.

The film, a savagely funny takedown of political correctness and the things we choose to hang in art galleries, had premiered to strong reviews -- but even director Ruben Ostlund was shocked as he picked up the award, shouting, "Oh my God, oh my God!"

"120 Beats Per Minute", a moving drama set in Paris at the height of the AIDS epidemic in the early 1990s, scooped second prize for its wrenching portrayal of a romance between two activists in the advocacy group ACT UP.

The film was a deeply personal project for director Robin Campillo, who was himself an activist in the French branch of the group that helped shame the world into action.

"Loveless", a bleak tale of a middle-class couple in Moscow looking to offload their child as they go through a bitter divorce, came in third.

The film by Kremlin critic Andrei Zvyagintsev offers a stinging critique of modern Russian society, depicting a country obsessed with consumerism and its smartphones.

He gives an electrifying performance as Joe, a former soldier who is hired by a New York state senator to rescue his daughter from a paedophile ring.

In her first film role in her native German, Hollywood star and former model Diane Kruger swapped her usually glamorous image to play a mother who vows revenge after her ethnic Kurdish husband and son are killed in a neo-Nazi attack.

Hailed as a "powerhouse performance" by Variety magazine, Kruger said the role had taken a huge emotional toll. "The film almost killed me," she said at Cannes. "I haven't worked since."

Sofia Coppola picked up best director for her remake of the American Civil War thriller "The Beguiled", starring Colin Farrell as a soldier who bewitches several Southern women including Nicole Kidman.

Collecting her award, the "Bling Ring" director thanked her father -- "Apocalypse Now" director Francis Ford Coppola -- for teaching her the tricks of the trade.

The nine-member jury opted to split the screenplay prize in two, dividing it between Scottish director Lynne Ramsay for "You Were Never Really Here" and Greece's Yorgos Lanthimos for "The Killing of a Sacred Deer", a chilling suburban thriller starring Colin Farrell and Nicole Kidman.

Nicole Kidman was the undisputed queen of this year's Cannes with four projects showing. To mark its 70th birthday, the festival rewarded her with a special prize.