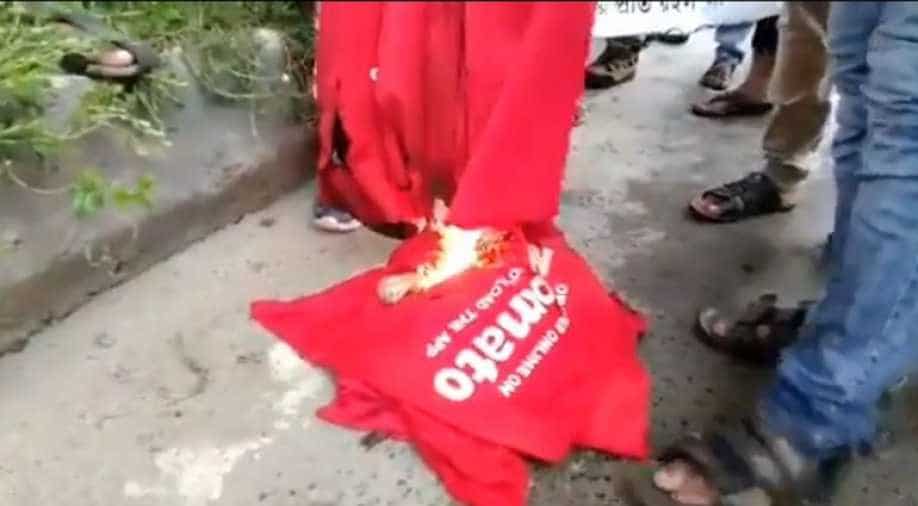 A group of employees burnt and tore off Zomato's official t-shirts in Behala, Kolkata on Saturday to protest against Chinese investment in their organisation

As the anti-China sentiment grows in India over the killing of 20 Indian Army soldiers at the Galwan Valley in Ladakh, employees of online food aggregator Zomato in eastern Indian city of Kolkata burnt their shirts on Saturday to protest against Chinese investment in the company.

A group of employees burnt and tore off Zomato's official t-shirts in Behala, Kolkata on Saturday to protest against Chinese investment in their organisation.

Kolkata's Zomato delivery boys protest against Zomato by burning the company's jerseys as Zomato is working for the Chinese Company .So they decided to give Mass resignation and don't want to indirectly serve China who killed our Indian Soldiers said one of the protester. pic.twitter.com/Oj0OFNWqxh

"The Chinese cannot attack our Indian Army jawans as they are making profits from here. They are entering into our land, which is not acceptable. As our company has Chinese investment, we have decided not to be associated with it anymore," a protester said, reported The Indian Express.

Also read | Marico ties up with Swiggy, Zomato to deliver goods during lockdown

"Indian army jawans have been killed, but Zomato loves China," protesters were heard in a video uploaded on Twitter, reported ET Tech.

In 2018, Ant Financial, a part of Chinese e-commerce giant Alibaba, had invested $210 million in Zomato to acquire 14.7 per cent stake. Zomator earlier this year raised an additional $150 million from Ant Financial.

A Zomato spokesperson told ET Tech that the protest was organised by "a small number of delivery partners" whose contracts have been terminated recently for "repeatedly violating our platform guidelines".

"Unfortunately, in their spite, they decided to get themselves heard by riding the wave of a sensitive sentiment," he said.