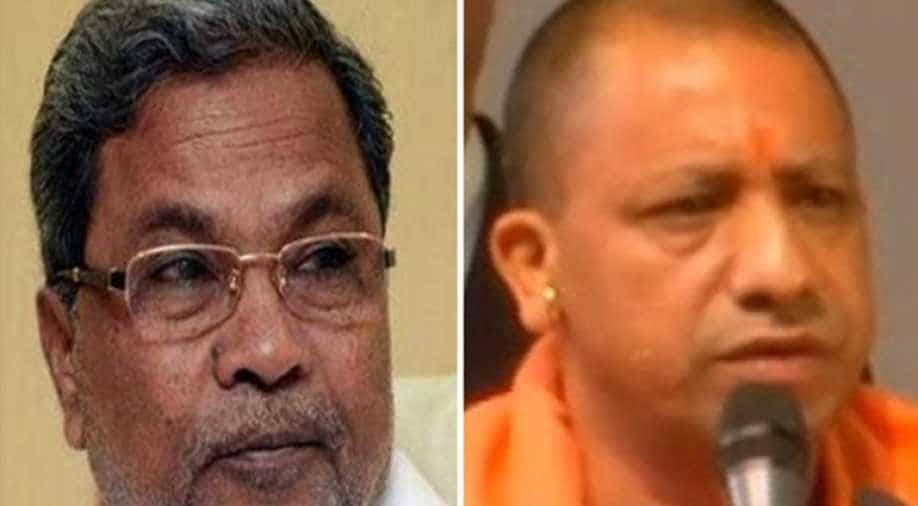 Taking their long-standing spat to a new level, Uttar Pradesh Chief Minister Yogi Adityanath today accused his Karnataka counterpart Siddaramaiah of killing Hindus, and Congress chief Rahul Gandhi of instigating communal rift through his numerous temple visits during the Gujarat Assembly election, and his proclamation of being a Hindu.

The over-a-minute-long video, posted on Uttar Pradesh BJP's Twitter handle sarcastically retorts to Siddaramaiah's recent statement about him being a Hindu, and shows pictures of 12 Hindus, who were killed in the last two to three years in Karnataka.

"But when questioned by Yogi, he (Siddaramaiah) calls himself a Hindu," states the video.

The video also highlights the corruption cases against Chief Minister Siddaramaiah and the 1,002 cases of farmers's suicide in Karnataka in the current fiscal year,

Adityanath, while addressing a BJP rally in Bengaluru, had earlier accused Siddaramaiah of mixing religion with politics and following the footsteps of Rahul Gandhi ahead of the assembly elections in Gujarat.

He had also questioned Siddaramaiah for "endorsing beef eaters" being a Hindu. The Karnataka chief minister had responded by saying that Hindus did eat beef, and questioned Aditynaath's right to criticise the people's food habits.

Siddaramaiah had also called Adityanath's governance in Uttar Pradesh as 'Jungle Raj' and opined that the latter could "learn a lot" from him.