Will cause third World War if I join politics: Indra Nooyi 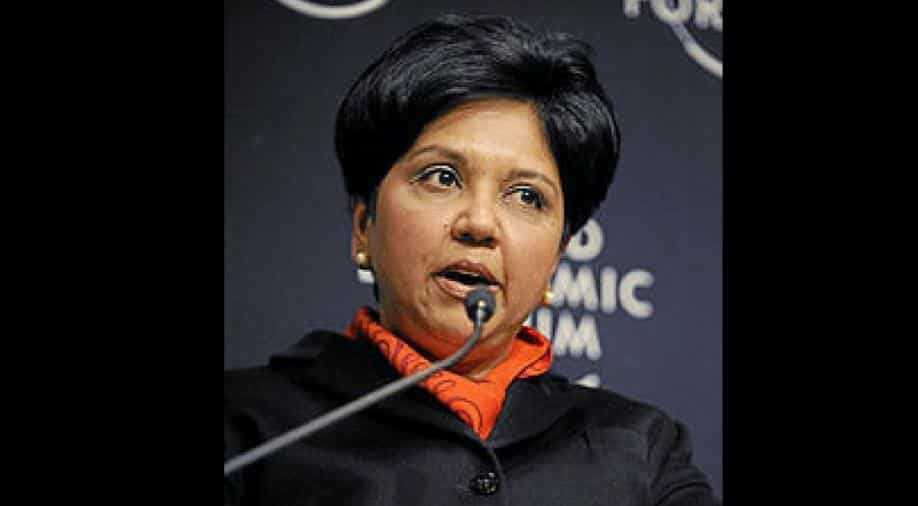 Asked if she would like to join US President Donald Trump's Cabinet now that she has stepped down as Pepsi CEO, Nooyi said, "Me and politics don't mix at all. I am too outspoken, I am not diplomatic. I don't even know what diplomacy is. I would cause a third World War. Don't do it".

PepsiCo's India-born former CEO Indra Nooyi has said she would cause a third World War if she joins politics as she is "too outspoken".

Asia Society, a non-profit organisation that focuses on educating the world about Asia, honoured 62-year-old Nooyi Tuesday with the 'Game Changer of the Year Award' in New York in recognition of her business achievements, humanitarian record and advocacy for women and girls around the world.

Asked if she would like to join US President Donald Trump's Cabinet now that she has stepped down as Pepsi CEO, Nooyi said, "Me and politics don't mix at all. I am too outspoken, I am not diplomatic. I don't even know what diplomacy is. I would cause a third World War. Don't do it".

Nooyi stepped down on October 2 as PepsiCo's CEO, after 12 years at the helm of the global beverage giant. PepsiCo's Board of Directors had in August announced that they unanimously elected Ramon Laguarta, 54, to succeed Nooyi as Chief Executive Officer.

Nooyi will remain Chairman until early 2019 to ensure a smooth and seamless transition.

After having worked 18 to 20 hours a day for the last 40 years, Nooyi said it was "liberating" to have a bit of free time.

"When I stepped down, I thought that it was going to be tough. For 40 years, I have done nothing but wake up at 4 am and figured out how to rush to work and work 18-20 hours a day," she said during the interaction.

Nooyi said a day after she stepped down, she realised that there was life beyond working.

"I am still a PepsiCo at heart but I am learning to step aside and realise that there is life beyond PepsiCo," she said.

Nooyi said she was looking forward to utilising her time writing and visiting as many countries as possible to talk about how to address issues of maintaining work-life balance.

She also plans to pursue several extra-curricular activities that she enjoyed but had to squeeze time for from her previous packed schedule.
"I am told I need to go to sleep school to learn how to sleep...Learning how to sleep 6, 8 or 10 hours, play Tennis, I don't know how it's going to be but I know it is going to be fun," she said.

Nooyi, who has long advocated the need for finding solutions to help women strike a work-life balance, recalled her experience of how she incorporated the "Asian model" in her life to manage her career and bring up her daughters.

She also emphasised that this model needed to be "imported" to the west.

"I imported a quintessential Asian model to my life," she said.

Nooyi and her husband did not want to leave their kids with a day care worker and turned to their families in India for help, asking parents, in-laws, aunts and uncles, grandparents to stay with them in the US for 3 to 4 months to help supervise their children.

Nooyi said there was a need to build communities where the older people and younger people can live together, enabling kids to learn the value of respect and wisdom.

"We need solutions to address the issue of work-life balance and co-opting the entire family is part of this solution," she said.
Given that in the west the focus has been too much on the nuclear family, Nooyi said people have forgotten that the definition of family is much broader than the nuclear family.

"If we don't provide support system for families, I don't know how we are going to do it. Traditional Asian values need to be revived - the joint family, coming together of communities has to happen," she said.

The 2018 Asia Game Changer Awards were given to individuals and institutions who have broken barriers, defined courage, worked miracles, and in turn inspired their fellow citizens of the world.

Sharing lessons learnt through her experiences, Nooyi said that her mother's advice to "leave the crown in the garage" holds true.
"Do not bring it in. If your husband wants to bring his crown in, that's just fine. That's crown. But don't take your crown in," she said, adding that some people may "hate" her for making such a remark.

"If you want to stay married, if you want to be a daughter, wife, mother, unfortunately the crown stays in the car. That is the unfortunate rule number one. Somebody has got to play the role of getting everybody together," she said.

Nooyi led a group of other revolutionary women as Asia Society's Game Changers, including the Afghan Girls Robotics Team who has made waves at international robotics competitions and Mira Rai, a record-shattering runner from a small village in Nepal, who is also an inspiration for millions of girls and young women.

Other recipients of this year's awards are the Thai rescuers who saved a dozen teenage soccer players in a flooded cave, the Japanese first responders who risked their lives following the tsunami and nuclear disaster at Fukushima.

Raed Saleh and the Syrian White Helmets, a global champion for "green cities" Wang Shi of China, Australia-based Iraqi pioneering surgeon who has brought new hope for amputees Munjed Al Muderis and the founders of Koolulam from Israel a musical phenomenon that aims to bridge the most difficult ethnic and religious divides are other recipents of the award.