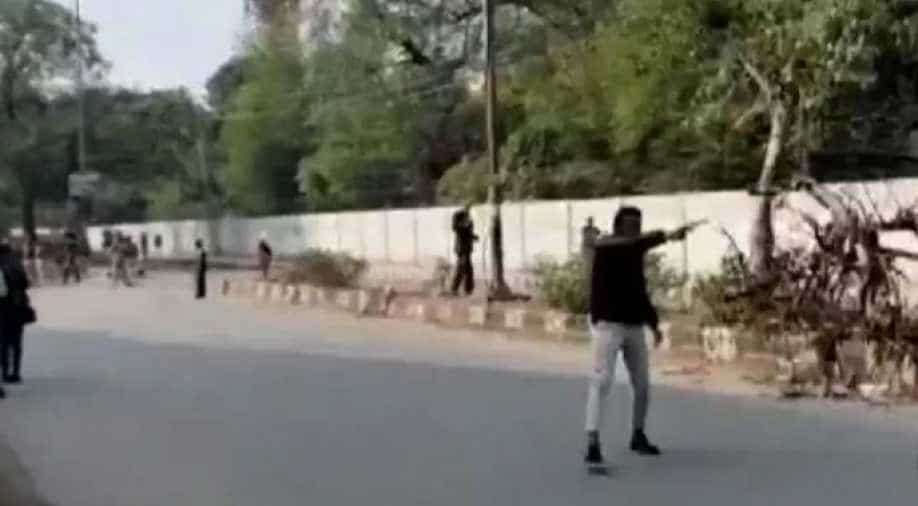 The man is reported to be a resident of Greater Noida's Jewar area. Photograph:( ANI )

According to reports, 19-year-old Ram Bhagat Gopal Sharma brandished his gun and opened fire where anti-CAA protests were going on.

A man on Thursday opened fire in Jamia area of Delhi, injuring a student of Jamia Millia Islamia University.

According to reports, 19-year-old Ram Bhagat Gopal Sharma brandished his gun and opened fire where anti-CAA protests were going on in Jamia area.

Sharma is reported to be a resident of Greater Noida's Jewar area and has been detained by the Police.

The injured Jamia student has been identified as Shadab Farooq, a second-semester student of MA Mass Communication.

According to reports, Farooq has sustained injuries on his left hand.

Also read: Anti-CAA resolution in European Parliament - What it means for India?

#WATCH A man brandishes gun in Jamia area of Delhi, culprit has been detained by police. More details awaited. pic.twitter.com/rAeLl6iLd4

"Student (Shadab Farooq) has sustained injuries in his left hand. He has been referred to the trauma centre. Doctors say he is out of danger. Apprehended person (Gopal) is being questioned," South-East District (Delhi) DCP Chinmoy Biswal told news agency ANI.

The Jamia Coordination Committee (JCC) had organised a march against the CAA and the National Register of Citizens (NRC), from Jamia area to Raj Ghat on Thursday.

"Jamia Millia Islamia will pay for the treatment of the injured student and reschedule exams for him," Akhtar said.

Akhtar said police personnel just watched as the man brandished the pistol and "shot our student".

"The incident has shaken our faith in the police," the VC said.

Meanwhile, Union Home Minister Amit Shah took note of the incident and has called for an investigation. Shah said that the Central government will not tolerate any such incident.

"Today I have spoken to Delhi Police Commissioner on the firing incident (in Jamia area) that has taken place and instructed them to take strict action. Central government will not tolerate any such incident, it will be taken seriously and the culprit will not be spared," Shah said today.