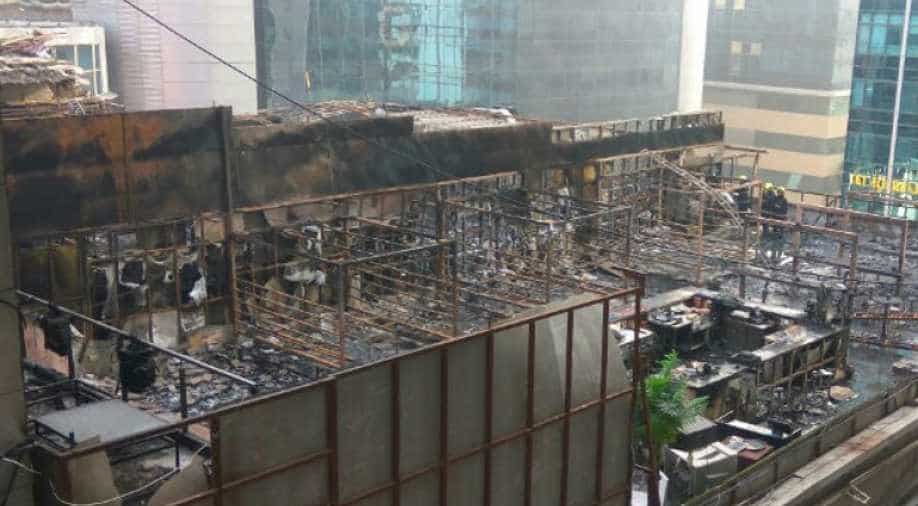 Two owners of the `1 Above` pub, Jigar Sanghavi and Kripesh Sanghavi, were arrested late on Wednesday night in connection with the fire Photograph:( ANI )

The family of seven people, who suffered critical injuries in the Kamala Mills fire, on Wednesday demanded a Central Bureau of Investigation (CBI) probe and sought provisional compensation for their medical treatment.

Prakash Wagh, the advocate of the petitioners, said, "Seven members of the same family were present there at the `1 Above` pub when the fire broke out. They are demanding a CBI probe and action against the guilty."

"They are also demanding a provisional compensation as they are undergoing medical treatment and a lot of money is being spent," he added.

He said that the probe should not be only conducted against the ones who are arrested but against the firemen and Brihanmumbai Municipal Corporation (BMC) as well.The family members, who were severely burnt, said that there was only one exit in the pub and that too only of about two feet breadth which led to a stampede.

"The way the firemen and the BMC ignored the safety norms is very serious," Wagh stated.

Meanwhile, two owners of the `1 Above` pub, Jigar Sanghavi and Kripesh Sanghavi, were arrested late on Wednesday night in connection with the fire that claimed the lives of 14 people last month.

Deputy Commissioner of Police (DCP), Virendra Mishra, on Thursday, said the police had laid a good trap and finally caught them.

"Today, around 12 pm, both the accused will be produced before the Bhoiwada Court. Two main accused are still absconding, namely, Yug Tuli and Abhijeet Mankar. Two teams of Mumbai Police are present in Hyderabad to capture Tuli, who was seen at the Hyderabad airport with his wife," Mishra added.

Acting on a tip-off, the Mumbai police arrested Sanghavi brothers from the city`s Bandra area when they had gone to meet their lawyer.The police had, earlier, announced a reward of Rs 1 lakh for the whereabouts of the `1 Above` owners.Jigar and Kripesh were arrested on the information provided by Juhu-based hotelier Vishal Kariya, who was arrested on Wednesday for sheltering the duo and another owner of the pub, Mankar.

The police have recovered a high-end car of accused Mankar, from the Juhu residence of Kariya, 42-years-old, who was then picked up for questioning.During the interrogation, the hotelier revealed that he sheltered the trio at his residence.Kariya had been booked under Section 216 of the Indian Penal Code (IPC).

The Sanghvi brothers were absconding since December 29 when the fire swept through `1 Above` and adjacent Mojo`s Bistro resto-pub in Kamala Mills compound in central Mumbai.Police said further investigation is on.