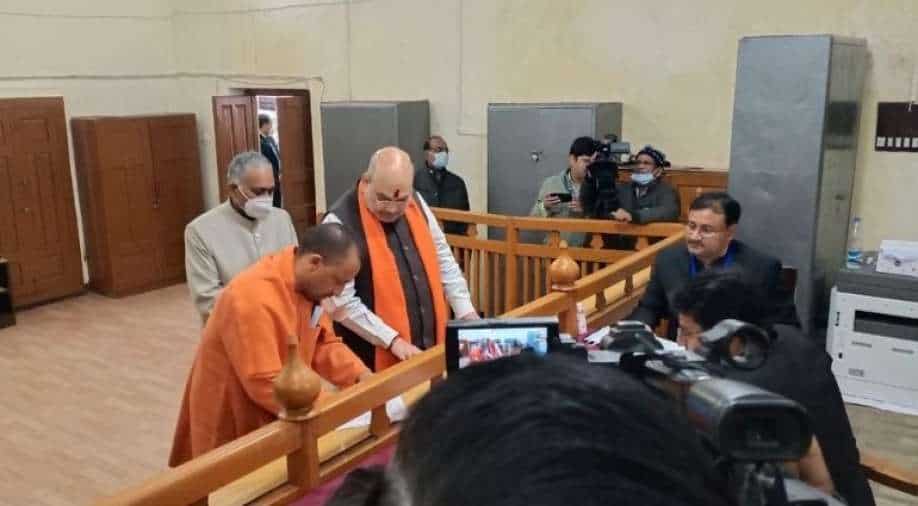 Chief Minister of India's most populous state Uttar Pradesh Yogi Adityanath was accompanied by India's Home Minister Amit Shah.Polling on this seat will be held in its 6th phase on March 3. Photograph:( Twitter )

The nomination became a huge political event because several important leaders and politicians from the Indian government were present throughout the official procedure.

Yogi Adityanath, a senior BJP leader and the Chief Minister of India's most populous state, Uttar Pradesh, filed his nomination papers today in Gorakhpur, where he is contesting in his first state election.

Amit Shah, India's Home Minister, was by his side.

The five-time MP prayed and conducted a havan at the Gorakhnath temple, where he remains head priest, before taking his first formal move toward fighting the UP Assembly election.

Yogi Adityanath's stronghold is Gorakhpur in eastern Uttar Pradesh, where he has won every parliamentary election he has run.

Because several significant leaders and politicians from the Indian government were present during the official procedure, the nomination became a major political event.

Yogi, a five-time former Lok Sabha (Lower House of the Parliament of India) MP, is running for the first time in the state Assembly elections.

Yogi had previously been declared the party's Chief Ministerial candidate by Shah.

When Yogi Adityanath was elected Chief Minister of Uttar Pradesh in 2017, he chose to join the legislative council rather than run for an Assembly seat.

Earlier in the day, Shah spoke to a workers' meeting, claiming that the BJP was on track to replicate its 2014, 2017 and 2019 victories, in which it won by a large margin.

He said that the party would win over 300 seats this time.

The Home Minister of India further said that Yog had freed the state of the mafia. "Today mafia is either in jail or outside Uttar Pradesh. He has worked relentlessly to change the image of the state," he said.

Shah went on to list the various welfare schemes introduced by the BJP governments to benefit the poor.

Yogi Adityanath, while speaking, thanked the party leadership for reposing faith in him and asked every party worker to work like a contestant and ensure BJP`s victory.

He lauded Shah for scripting the party's success and making it the biggest political organisation in the world, adding that the double engine government in Delhi and Lucknow had excelled in various spheres.

Yogi had done 'Rudrabhishek' (an ancient chanting) at the Gorakhnath temple before filing the nomination papers.

Heavy barricades had been built on the route to the district collectorate as part of the security plans for the event.

Drone cameras were seen keeping a tight eye on people and vehicles moving around.