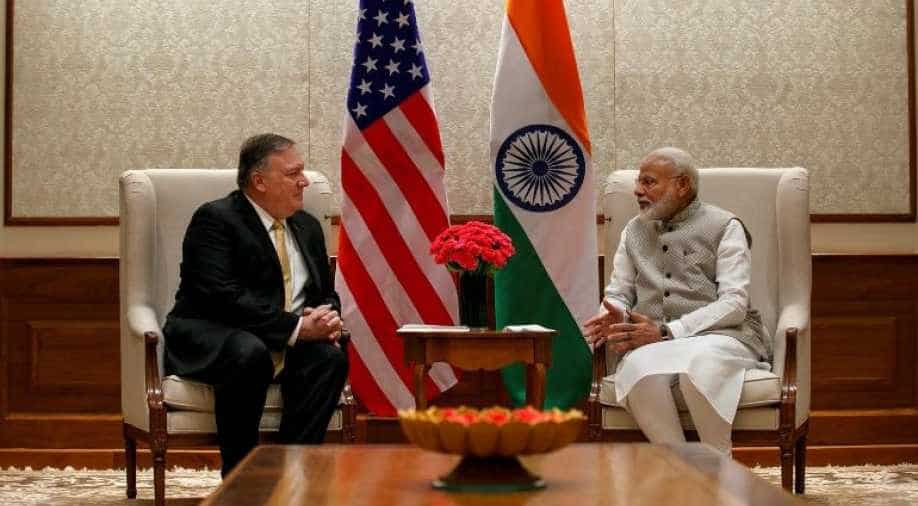 His meeting with PM Modi began at 10 am. After his meeting with the prime minister, Pompeo met External Affairs Minister S Jaishankar at around 12 pm.

US Secretary of State Mike Pompeo on Wednesday met Prime Minister Narendra Modi at his residence in New Delhi. As per reports, PM Modi and Pompeo discussed various aspects of the bilateral relationship to strengthen the India-US strategic partnership.

"Working together to further deepen our strategic partnership. Secretary Pompeo called on PM Narendra Modi to exchange views on various aspects of Indo-US relationship. PM will meet President Donald Trump on the sidelines of the upcoming G20 Osaka Summit," Ministry of External Affairs spokesperson Raveesh Kumar tweeted along with pictures of the meeting.

His meeting with PM Modi began at 10 am. After his meeting with the prime minister, Pompeo met External Affairs Minister S Jaishankar at around 12 pm. Both will have a working lunch, news agency PTI reported.

Later in the day, Pompeo will make an "India policy speech" in the evening.

He also met with NSA Ajit Doval in South Block.

The US Secretary of State arrived in India on Tuesday evening. He is on a three-day visit to New Delhi.

Calling the visit an important one, S Jaishankar speaking in Gandhinagar said, "we have a very positive approach for the meeting." He told reporters that although it is not a structured visit, some of the areas that are likely to be tabled during the discussions would feature trade talks. Other areas of dialogue would include strategic ties, Iran-US issue, H1b visa, data localisation, terrorism and Indo-Pacific strategy among others.

Watch: US Secretary of State Mike Pompeo arrives in India for three-day visit

"There is enormous potential to grow our trade relationship and create the high-quality jobs that Prime Minister Modi wants if India lowers trade barriers and embraces fair and reciprocal trade," according to a State Department Fact Sheet.

"The Trump Administration is working to ensure that American companies operating in India have the same level playing field that Indian companies enjoy in the United States," it said.

The State Department said as India's number one overseas market, the US purchases close to one-fifth of its exports. India is also the fastest growing major market for US goods.

Pompeo's visit to India is aimed at deepening strategic relationship with the largest democratic country of the world, the US said Tuesday.

"Prime Minister Modi's sweeping mandate in the recent elections creates a unique opportunity to realize this vision," it said hours after Pompeo landed in New Delhi on a three-day visit.

This is the first high-level US visit to India after PM Modi took charge of his second term this year. Pompeo arrived in New Delhi last year for the 2+2 dialogue wherein the defence and foreign ministers of both the countries held meetings.