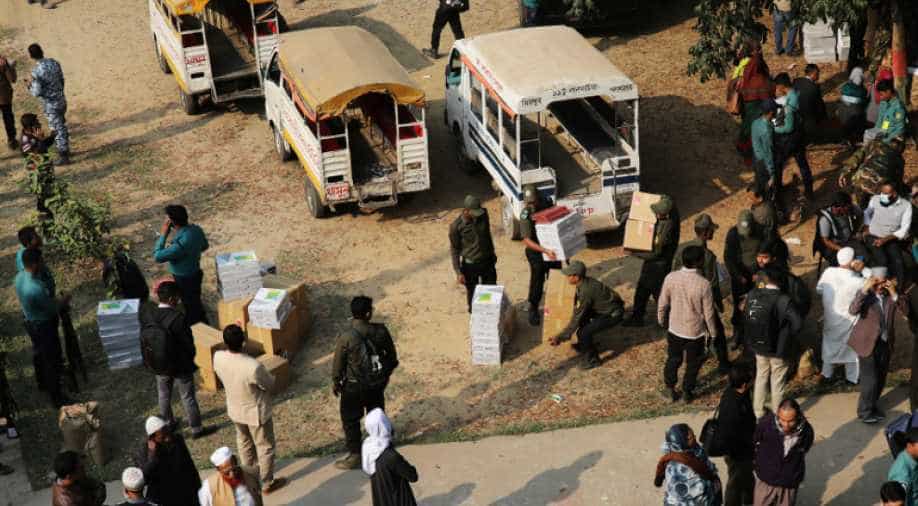 Law enforcement officials gather to distribute electronic voting materials to a different voting centre ahead of the elections in Bangladesh. Photograph:( Reuters )

Eight people were killed in skirmishes between activists of the ruling Awami League party and supporters of the main Bangladesh Nationalist Party opposition in separate incidents.

Eight people were killed in clashes on election day in Bangladesh on Sunday, police said.

While three people were killed in skirmishes between activists of the ruling Awami League party and supporters of the main Bangladesh Nationalist Party opposition in separate incidents.

Two others were shot dead by police, one after he tried to steal a ballot box and the other when opposition activists attempted to storm a polling station, according to officers.

Voting for the general elections in Bangladesh, to elect the country's next prime minister, began at 8:00 am on Sunday.

Over 10 crore Bangladeshis are expected to vote in the single-phase general election in the country's 11th national parliamentary election.

Polls opened at 08:00 am (0200 GMT) amid tight security following a campaign that was marred by violence and allegations of a government crackdown on opposition activists.

Around 600,000 security personnel were deployed in the country ahead of the polls.

Clashes have gripped the Muslim majority country of 165 million in the run-up to the polls.

Thirteen people were earlier killed and thousands injured in skirmishes between supporters of Hasina's ruling Awami League and activists of the opposition Bangladesh Nationalist Party (BNP).