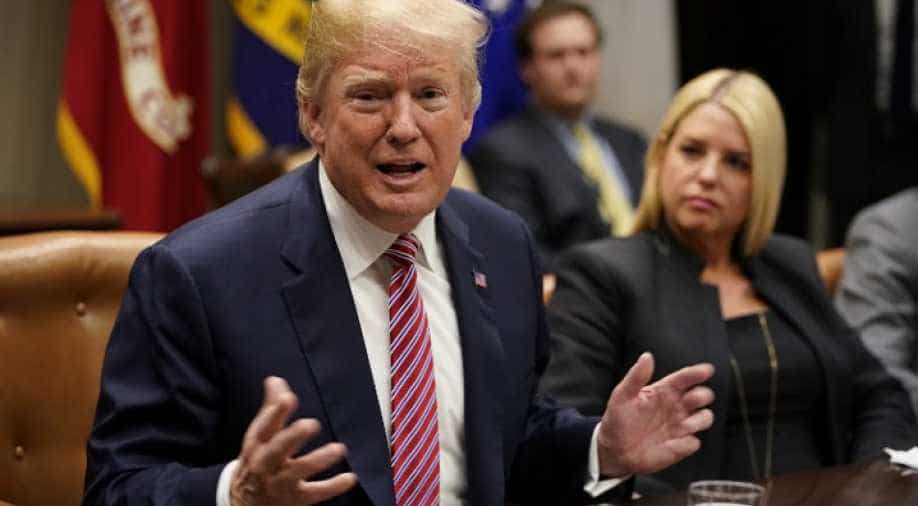 US President Donald Trump and Australian Prime Minister Malcolm Turnbull today reiterated their commitment to promote a free and open Indo-Pacific and affirmed the importance of expanding quadrilateral co-operation with India and Japan.

Following their meeting, the White House said Trump and Turnbull "discussed ways to deepen trilateral cooperation with Japan and affirmed the importance of expanding cooperation between Australia, the US, Japan, and India."

Expressing serious concerns about the situation in the South China Sea, they called upon parties to exercise restraint and resolve disputes peacefully based on international law.

Trump thanked Turnbull for his continued support for the US' program of Freedom of Navigation Operations.

The Overseas Private Investment Corporation signed a Memorandum of Understanding with Australia to advance United States-Australia support for high-quality infrastructure investment in the Indo-Pacific region and encourage reforms to improve regulations, transparency, and local capital markets.

This is probably aimed at the One Belt One Road initiative of China, which has created a sense of anxiety among various countries in the region.

The joint statement, however did not mention the Chinese initiative in this regard, which the US Secretary of State, Rex Tillerson, has called as predatory economics.

According to the joint statement, the two countries intend to launch the United States-Australia Strategic Partnership on Energy in the Indo-Pacific region to promote energy infrastructure, low emissions technologies, and global gas markets.

Affirming their support for global health security to prevent, detect, and respond to infectious disease outbreaks, the two countries also agreed to intensify cooperation to support the growth of digital trade between them, ensure an open, free and secure Internet, and advocate the liberalisation and facilitation of global digital trade.

Sharing concerns about terrorists' use of cyberspace and the evolving threat of terrorism to both nations and the global community, Trump and Turnbull discussed about Afghanistan and on-going efforts to assist its people in their quest for peace and security and to deny terrorists access to safe havens there.

Trump, according to the White House, thanked Turnbull for Australia's leadership on counterterrorism issues in Southeast Asia and its substantial contributions to the Global Coalition to Defeat ISIS.

They further discussed cooperation as terrorist fighters depart Iraq and Syria and return to their home countries.

Earlier at a joint White House news conference, Trump thanked the prime minister for serving as a strong voice for peace and stability across the entire Indo-Pacific region.

"Australia is one of our closest partners in our campaign of maximum pressure to denuclearise the Korean Peninsula. Today, we put the strongest sanctions on Korea that we have ever put on a country.

We must continue to stand together to prevent the brutal dictatorship from threatening the world with nuclear devastation," he said.

"Our nations, likewise, share a commitment to keeping our people safe from terrorism. Australian troops are currently serving alongside Americans and our partners in Afghanistan and the coalition to defeat ISIS. Together, we're denying terrorists safe haven, cutting off their funding and discrediting their wicked ideology," Trump said.

The strong partnership can also be seen in the flourishing economic relationship, he added.

Turnbull said that the meeting was a great opportunity to strengthen and deepen their engagement with the US and to lay the groundwork for a new phase of intensified cooperation, the next 100 years of mateship.

"We recognise that the prosperity of our region, and indeed the world, has been underpinned and in fact built on a foundation of a rules-based order which has been secured by the leadership of the United States ever since the Second World War. That leadership has been critical," Turnbull said.

The relationship between the two countries is based not only on history, but also the same values they share and a deep well of trust and spirit based on those enduring values of freedom, democracy, the rule of law, enterprise, ingenuity, the spirit of having a go, he said.

"And, if it doesn't work out, dust yourself off and have another go. That is a core American and Australian value. That spirit of enterprise is what leads us on. Of course, our relationship is underpinned by millions of people-to-people and family links and, of course, the extensive economic cooperation we've spoken about," he added.