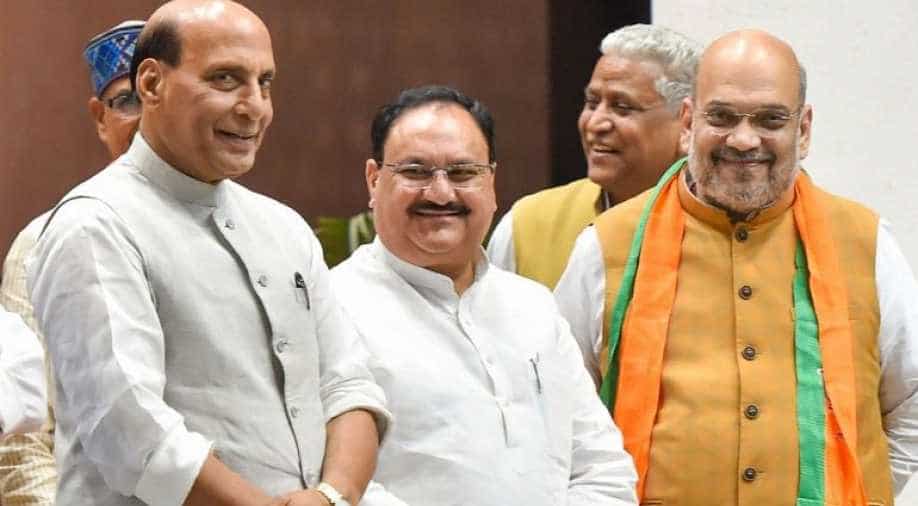 'This day will be marked in golden letters when Articles 370 and 35A of the Constitution was revoked to restore the unity and integrity of India and to connect Kashmir with the main development stream,' BJP working president JP Nadda tweeted

"This day will be marked in golden letters when Articles 370 and 35A of the Constitution was revoked to restore the unity and integrity of India and to connect Kashmir with the main development stream," Nadda tweeted.

Union Minister for Petroleum Dharmendra Pradhan congratulated Prime Minister Narendra Modi and Home Minister Amit Shah for their "bold step" and termed the move as the correction of "a historic wrong."

"Tough resolve, patience, courage and relentless pursuit of larger goals make a leader. The dream which started from Lal Chowk in 1992 led to an incredible journey of a leader who made history today by taking this step to fulfil aspirations of people in Jammu & Kashmir and Ladakh," read another tweet.

"Congratulations to PM Narendra Modi and HM Amit Shah for moving to revoke Article 370 from Kashmir. This will increase the unity of the nation, lead to new avenues of development in Kashmir, and will enable the people to move ahead at par with the rest of the nation towards advancement" he tweeted.

Uttarakhand Chief Minister Trivendra Singh Rawat also hailed the decision by saying, "I congratulate Narendra Modiji and Amit Shahji for their step. Today our country has become one, on this day the widows and families of the soldiers who gave up their lives defending the nation and Kashmir should feel proud."

"I am amazed by the behaviour of Congress. We are completing the unfinished agenda of Congress. Even Jawaharlal Nehru himself had said it once that it will be removed someday, Modi and Shah made it possible. Those who understand the situation of the people of Jammu and Kashmir will support this," Singh told ANI.

Former Union Minister and BJP leader Rajyavardhan Singh Rathore said Article 370 was a hindrance in the development of Jammu and Kashmir, adding that with it gone, the state will prosper and terrorism will stop.

"Kashmir was separated from the country because of Article 370. Because of this article, Kashmir was not growing. I would like to congratulate Prime Minister Modi, Amit Shah and everyone for this step. Gujjars living in Kashmir will get reservations and terrorism will stop," Rathore said.

On Monday, the Centre scrapped Article 370 of the Constitution that gives special status to Jammu and Kashmir.

Shortly after Shah tabled a resolution to this effect in Rajya Sabha, President Ram Nath Kovind came out with a notification -- The Constitution (Application to Jammu and Kashmir) Order, 2019 that will come into force immediately.

The order will supersede the Constitution (Application to Jammu and Kashmir) Order, 1954 as amended from time to time.