Too many terror groups finding safe haven in Pak: Tillerson 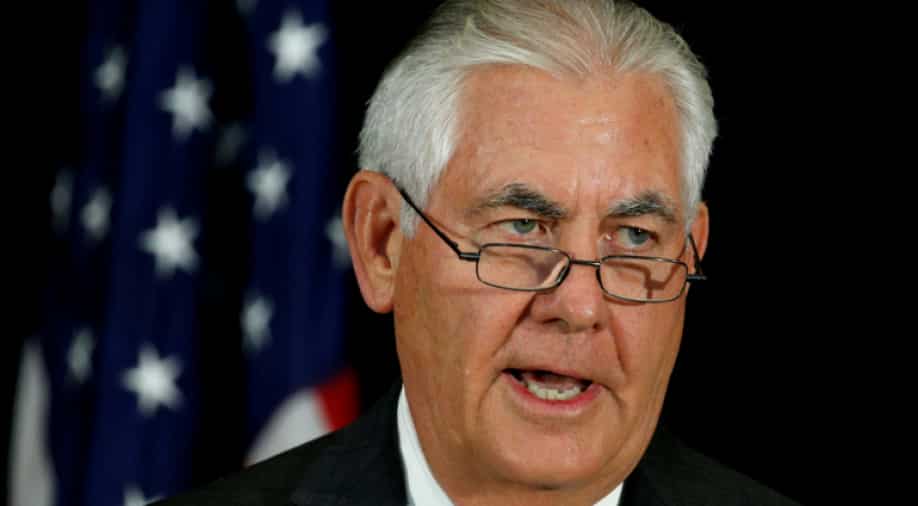 'Terrorist safe havens will not be tolerated,' Tillerson said. But he added that the US wanted to work with Pakistan 'in a positive way as we think this is?in their interest in the long term'.? Photograph:( Reuters )

US Secretary of State Rex Tillerson said Wednesday that too many terror groups were finding safe haven in Pakistan -- which is now threatening the stability of the Pakistani government.

Too many terror groups find safe haven in Pakistan which is now threatening stability of the Pak govt: Rex Tillerson,US Secy of State

Terrorist safe havens will not be tolerated: US Secretary of State Rex Tillerson

Tillerson added that he had had a "very open, frank exchange" with Pakistan's leaders in Islamabad on Tuesday, and that he had conveyed to them the US's expectations.

"Terrorist safe havens will not be tolerated," Tillerson said on Wednesday.

But he added that the US wanted to work with Pakistan "in a positive way as we think this is in their interest in the long term".

Tillerson was, on the contrary, full of praise for India.

India and the US, he said, were "natural allies". And that they stand "shoulder-to-shoulder against terror".

He added that India was crucial to the US strategy in Afghanistan and that they "back India as a leader in the region".

External Affairs Minister Sushma Swaraj said she was happy "our defence and strategic relations have deepened" after Prime Minister Narendra Modi's US visit.

And that "recent attacks in Afghanistan are proof that safe havens and supporters of terrorism are active. Pakistan needs to act on this".

She added that President Trump's policy on terrorism can only succeed when Pakistan takes action against terror groups.

Swaraj also added that an India-US-Afghanistan trilateral meeting will be held in December: EAM Swaraj

Swaraj said she had also discussed the H1B visa issue -- and the "important contribution of Indians working in the US on the visa -- with Tillerson.

We also discussed the important contribution of Indians working in the USA on H1B visa: EAM Swaraj after meeting with Rex Tillerson

US President Donald Trump has clamped down on the visa. Most Indians in the US are there on the H1B.

Swaraj also indicated that India was toeing the US line on North Korea.

"Our trade with North Korea has reduced a lot and our embassy there is very small," she said.

Swaraj did add however that she had told Tillerson that some nations friendly with the US must have an embassy in North Korea, making at least some communication possible.