Taps run dry for 8th day in Shimla; tourists asked not to visit 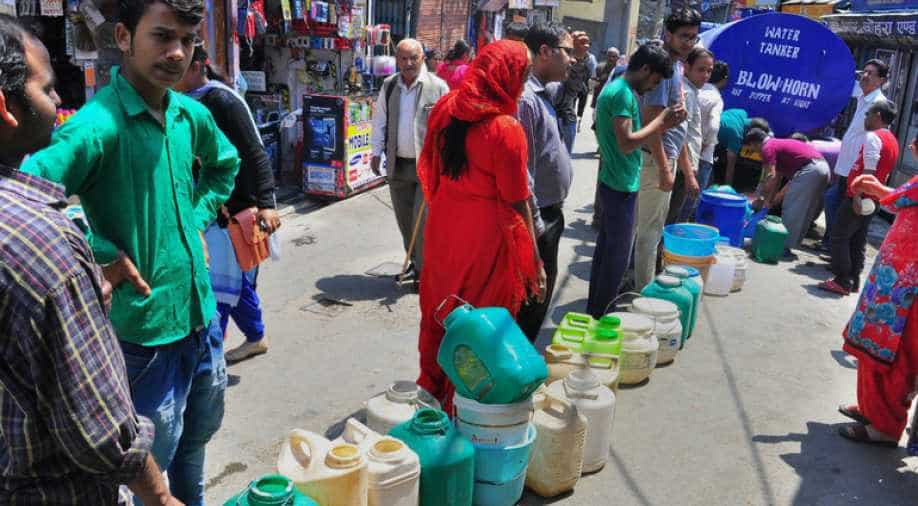 People stand in a queue to collect water from a tanker, as the city faces acute shortage of drinking water, in Shimla. Photograph:( PTI )

Suffering from acute water crisis, Shimla city has run out of the water as it remains without water for over a week now.

Following the water crisis, local residents are posting keep-off-Shimla messages on social media urging tourists to choose another destination for their summer holidays.

The Himachal Pradesh High Court on Tuesday also ordered to halt construction activities in order to curb the water use in Shimla.

The order also banned car washing for a week.

May-June months are the peak time of Shimla in which it experiences the highest number of tourists from neighbouring areas. According to reports, the population of Shimla Municipal Corporation area is about 1.72 lakh but it increases by 90,000 to one lakh more tourists during the peak season.

The parched Queen of HIills, Shimla has fallen short to less than 50% of the required amount of drinking water due to the dry winter. The requirement of water reportedly increases to 45 million litres a day during the peak season.

Recently, state chief Jai Ram Thakur Pradesh admitted that there is a shortage of water in some areas of the state while assuring that the government is taking steps to provide relief to the people.

So far the water in each zone was being supplied by the government water tanks but that too is happening after a gap of several days.

The court also issued a strict order to not send water tankers to the individual, particularly if they live in VIP areas including judges, ministers, bureaucrats, police officers etc.

However, that court has exempted the governor and the chief minister from the order.

The water crisis in the city has forced people to buy water from private suppliers or wait in a long queue to get a bucket of water.

Hotels are also affected by the crisis as many bookings have been cancelled in the last 2-3 days.

The water scarcity has not only caused serious problems in the government and private hospitals. The hostels of local educational institutions and schools are still without water, though they were supplied water through tankers.

The people are also agitated by the crisis and stages a sit-in protest outside the waterworks office on the Mall road.

They also marched towards Chief Minister's residence but police managed to stop them.

The water crisis is not a new phenomenon in India. Many parts of India experience water shortage. The crisis further deepens in months of May and June as they are the country's hottest months, though parts of the country's north, south and west have already registered temperatures in excess of 40 degrees Celsius.