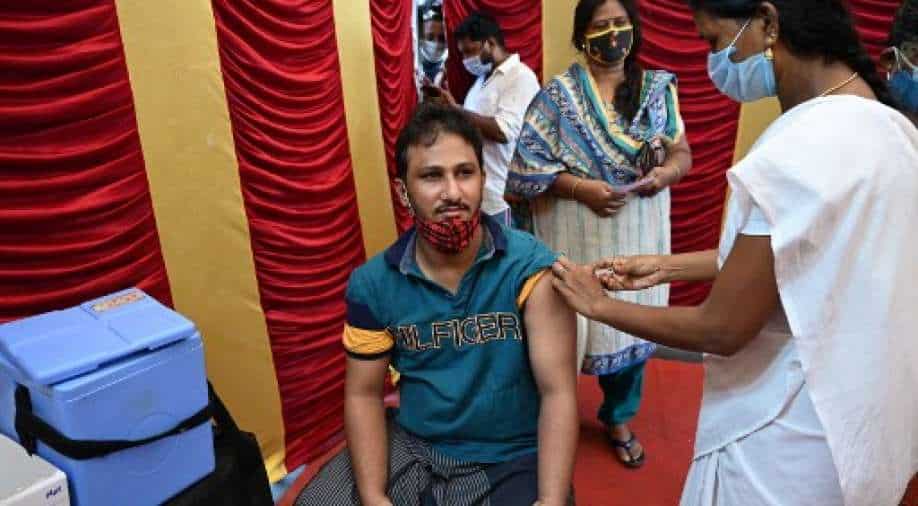 A health worker inoculates a man with a dose of Covaxin vaccine at a camp in Chennai (file photo). Photograph:(AFP)
Follow Us

Based on 765 clusters, with each consisting of 30 individuals, the samples were taken at random from a village (in rural areas) or a street (in an urban area).

According to a serosurvey conducted by the State Government, nearly 23 % of the tested samples had IgG antibodies against the SARS-CoV-2 Virus, the infection that causes COVID-19.

The state-wide survey was conducted in April this year, across all districts of the state, except Chennai.

Based on 765 clusters, with each consisting of 30 individuals, the samples were taken at random from a village (in rural areas) or a street (in an urban area).

Completed under the supervision of Dr T.S. Selvavinayagam, Director of Public Health and Preventive Medicine, this survey showed that 5316 individuals of the total 22904 participants had antibodies. While the overall seroprevalence across the state was 23%, it was found to be highest in the districts adjoining Chennai - Tiruvallur (49%), Chengalpattu (43%) and Kanchipuram (38%). The lowest seroprevalence was seen at Nagapattinam District (9%).

Notably, the first such state-wide serosurvey conducted in Oct-Nov 2020 had revealed 31% seropositivity, which is much higher than the latest one. Back then, 6995 samples out of 22690 were found to have developed antibodies.

However, the Government attributes the decrease in seroprevalence to the fact that the first survey was conducted a month after the peak of the first wave, which occurred in August. In the case of the second survey, it was conducted close to the start of the second wave in Tamil Nadu. The possibility of antibodies weaning in the five-month interval between November 2020 and April 2021 is also said to be a factor, based on studies published in International journals.

Other factors are that vaccination coverage till March was meant to cover only the vulnerable population (above the age of 45), whereas other age groups we unvaccinated. It was also observed that there were no variants of SARS CoV -2 during the first serosurvey, whereas several variants were detected in the community during hr subsequent survey.

Despite Tamil Nadu reporting more than 1/5th of India’s daily COVID-19 cases and the highest for any state in the country, the state is seeing a declining trend and an appreciable higher vaccination rate. Hence, a third sero survey is proposed to be carried out between July and August this year.