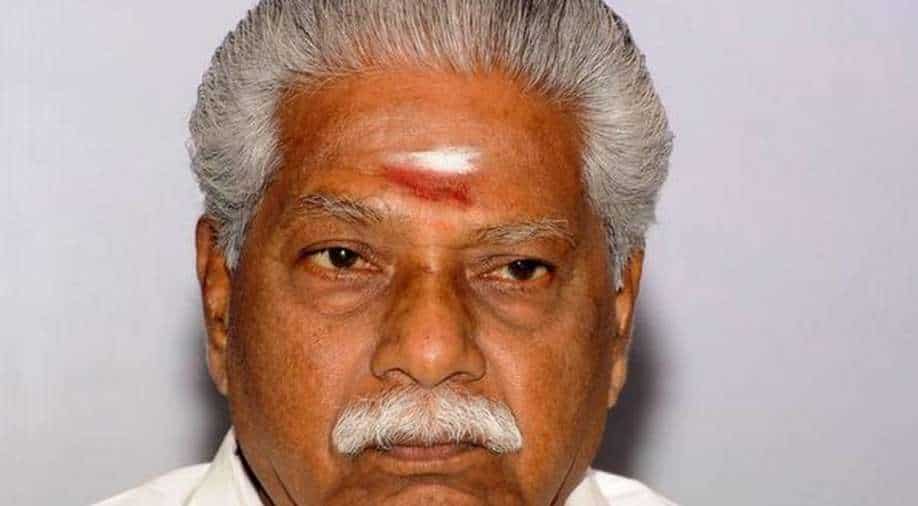 Tamil Nadu Agriculture Minister R Doraikannu, who was battling Covid-19, has died, the hospital treating him said on Sunday.

"With deep grief, we announce the sad demise of Honourable Minister for Agriculture R Doraikannu," on Saturday at 11.15 pm, he said.

"Our thoughts and prayers are with the grieving family during this difficult period," he added.

Tamil Nadu Governor Banwarilal Purohit condoled the death of Daoraikannu and said he was saddened to know about the demise of the Minister.

Doraikkannu "was known for his simplicity, humbleness, straightforwardness, governance skills and commitment towards the welfare of farming community..."

"He handled Ministry of Agriculture with full dedication and engraved his strong mark. His untimely demise is an irreparable loss to the people of Tamil Nadu and particularly to the AIADMK party," he said in his condolence message.

Purohit conveyed his deep condolences to the bereaved members of the family and said he prayed to the Almighty God to rest his soul in peace.

Doraikkannu was elected to the Tamil Nadu Assembly from Papanasam in Thanjavur district in 2006, 2011 and 2016, with the late chief minister J Jayalalithaa inducting him in the cabinet in 2016.

The 72-year-old Minister's health had on Sunday suffered a significant deterioration in vital functions.

The hospital had said on Monday that the Minister was being treated for severe COVID pneumonia and its complications.

A CT scan had showed 90 per cent lung involvement vis- a-vis the infection and he was put on ECMO (extracorporeal membrane oxygenation) and ventilator.

On October 13, the minister experienced unease when he was on his way to attend the funeral of Davusayammal, Chief Minister K Palaniswami's mother, who had died at the age of 93 at Salem.

Doraikkannu, who was travelling in his car, was rushed to the government medical college hospital in Villupuram and from there was shifted to Kauvery hospital the same day.