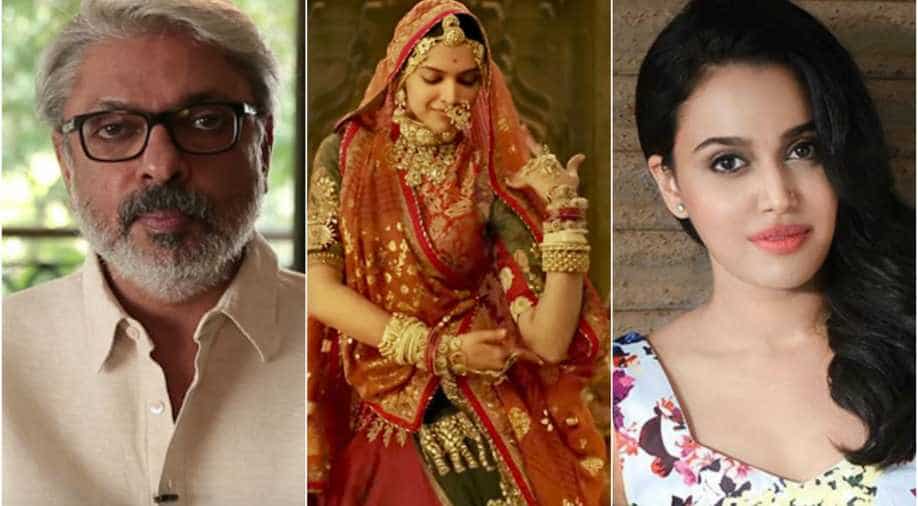 Released on January 25, Padmaavat is so far going houseful. Photograph:( Others )

There seems to be no respite for Sanjay Leela Bhansali's Padmaavat. Even though the film has managed to release in most parts of the country on January 25th, the film is being called out for its regressive content. Many have felt Bhansali, despite giving a disclaimer in the beginning, glorifies the archaic practice of Jauhar. Critics, thinkers and writers have also condemned the director for glamourizing the climax making the Jauhar scene look larger than life.

Actress Swara Bhaskar, who is known to speak her mind on pertinent issues, is the latest to call out Bhansali's regressive script. In an open letter for a news website, Bhaskar condemned Bhansali for glorifying Jauhar in his film.

Beginning by congratulating Sanjay Leela Bhansali for the film, Swara Bhaskar wrote that how she has batted for him and his film and spoken on the importance of artistic freedom. Bhaskar wrote that she had worked with Bhansali in a small role in Guzaarish, and how she had observed the director's precision over minutest details.

Also read: How Sanjay Leela Bhansali plays to the gallery with Padmaavat

Attaching a video of her speaking in favour of Padmaavat, Swara reminded Bhansali how she always took a stand for him.

But the actress said that after watching Padmaavat, she felt she was reduced to a vagina. Swara wrote, "I felt reduced to a vagina–only. I felt like all the ‘minor’ achievements that women and women’s movements have made over the years– like the right to vote, the right to own property, the right to education, equal pay for equal work, maternity leave, the Vishakha judgement, the right to adopt children…… all of it was pointless; because we were back to basics."

Swara said that a woman had the right to live despite being raped, despite being widowed. "Surely Sir, you agree that Sati, and Jauhar are not practices to be glorified. Surely, you agree that notwithstanding whatever archaic idea of honour, sacrifice, purity propels women and men to participate in and condone such practices; that basically Sati and Jauhar, like the practice of Female Genital Mutilation (FGM) and Honour Killings, are steeped in deeply patriarchal, misogynist and problematic ideas," the actress wrote.

She further wrote that she understands that the movie is a period film and set in the 13th century where it was normal of a woman to commit Sati or Jauhar than being touched by another man who is not her husband, but it did not mean that it had to be projected in the way Bhansali did in his film. "I understand that Jauhar and Sati are a part of our social history. These happened. I understand that they are sensational, shocking dramatic occurrences that lend themselves to splendid, stark and stunning visual representation; especially in the hands of a consummate maker like yourself — but then so were the lynchings of blacks by murderous white mobs in the 19th century in the US – sensational, shocking dramatic social occurrences. Does that mean one should make a film about it with no perspective on racism? Or, without a comment on racial hatred? Worse, should one make a film glorifying lynchings as a sign of some warped notion of hot-bloodedness, purity, bravery – I don’t know, I have no idea how possibly one could glorify such a heinous hate crime," Swara wrote.

Bhaskar said that despite the story being based in the 13th century, the film had 21st-century context and that glorifying a mass suicide in order to protect one's honour was not the most accurate way of telling the story. "The context of your film is India in the 21st century; where five years ago, a girl was gang-raped brutally in the country’s capital inside a moving bus. She didn’t commit suicide because her honour had been desecrated, Sir. She fought her six rapists.

Bhaskar also wrote that how a disclaimer at the beginning of the movie made no sense when the entire film was about Rajput and the community's attempt at saving honour that was more important than the right to live. "In the climax, breathtakingly shot of course – hundreds of women bedecked in red like Goddess Durga as bride rushed into the Jauhar fire while a raving Muslim psychopathic villain loomed over them and a pulsating musical track – that had the power of an anthem; seduced the audience into being awestruck and admiring of this act. Sir, if this is not glorification and support of Sati andJauhar, I really do not know what is,"the letter further added.