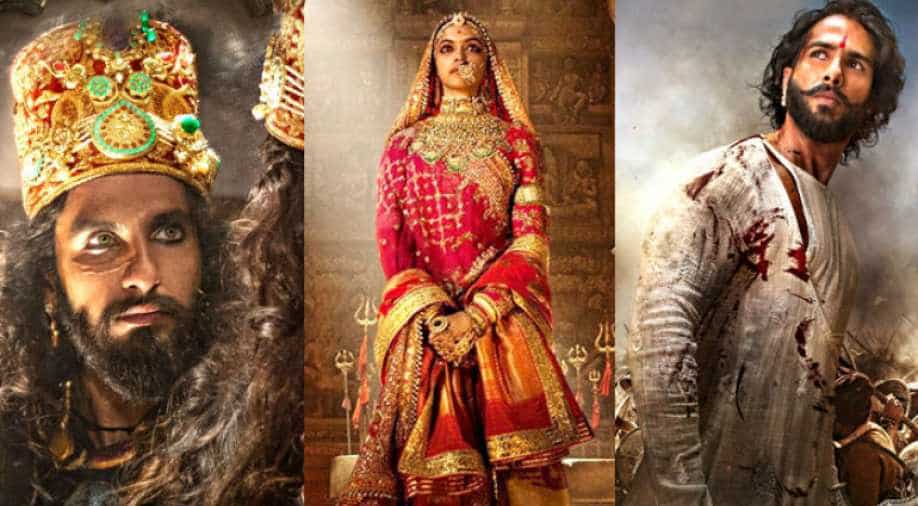 Sanjay Leela Bhansali's Padmaavat is based on Jayasi's poem by the same name. Photograph:( India.com )

In Sanjay Leela Bhansali’s Padmaavat, the eyes do the talking. They speak of the havoc that Khilji is set to create in Chittor, they speak of the determination and grit that Ratan Singh has while fighting a barbaric army and they speak of love, pride and honour when Padmavati bids farewell to her husband. Bhansali’s film scores because he makes the eyes speak. Amid the grandeur, the visually stunning frames- the three lead actors emote through their eyes and act out a known story set in the 13th century.

For a good part of 2017, the film has been in news for false news. Because when one watches the film, one can see that contrary to the claims made by protesting fringe groups and ignorant state governments, Padmaavat- if anything- upholds the honour of the Rajput community and celebrates the community's 'aan, baan and shaan'.

Also see: How Sanjay Leela Bhansali plays to the gallery with Padmaavat

Through scenes, dialogues and how the story is woven- the community’s values, its valour, the way they deal with situations, and their loyalty is highlighted in more ways than one.

Bhansali creates two striking worlds- one of Alauddin Khilji which is dark, grim and unkempt. The other is of Ratan Singh and Padmavati in Chittor- which is lit up, decorated and pristine.  And these two worlds collide when Raghav Chetan, a former priest tells Khilji that he can truly be a Sultan of Hind if he has the most beautiful Padmavati by his side and a control over the Rajputs. And Khilji, thus, becomes obsessed with the idea of acquiring Padmavati. But the man who only knows the language of loot, plunder and ruthless killing doesn’t understand the valour, pride and honour the Rajputs stand by. He also is unaware of the righteous Padmavati and her sharp brain who would never bow down to wishes of an invader.

Bhansali remains true to his style as he narrates age-old folklore of how Queen Padmavati opted to perform Sati instead of bowing to Khilji’s wishes in the most visually stunning way. The film is mounted on a large scale and opulence is, many of the times, a bit overwhelming. But that’s how Bhansali’s films always are. Grand, visual extravaganzas with dramatic dialogues and backdrops and Padmaavat is just that. Each scene is elaborate, almost perfect and like a painting making it a treat for the eyes for the greater part of the film.

Deepika Padukone and Shahid Kapoor in a still from the film. (WION)

The film’s high point is Sudeep Chatterjee’s splendid camera work. The ariel shots of the battle scene make you feel overwhelmed at the sheer magnanimity of the situation. The scenes where Padmavati and Ratan Singh romance are soft, intimate and make the viewer feel like an intruder, privy to the couple’s intimate moments while scenes involving Khiljis are chaotic, dark and grey.

The story is known one but it is the actors who make the film come alive. With just a few lines, Deepika Padukone, dressed in the gorgeous costumes, looks stunning and emotes through her eyes. So does Shahid Kapoor, a formidable actor, who delivers a very restraint performance as Rawal Ratan Singh. But the film clearly belongs to Ranveer Singh as the menacing Alauddin Khilji. With a Khal Drogo-esque look, the actor creates mayhem in the lives of Ratan Singh and Padmavati. Bhansali creates a beast, who is childlike at times, maverick at others, and completely ruthless as a Sultan. And Singh transforms himself accordingly, creating a character that will remain well etched in the minds of the cinema lovers for years to come. In fact, the film is quite literally from his point of view, and his obsession with Padmavati. They could have named the film after his character, would have saved them a lot of trouble, really.

Strangely, while Ranveer and Deepika share no scene together, they do share a strange unspoken chemistry which seems missing between Shahid and the actress.

Ranveer’s electric performance also saves the second half of the film, which drags to an extent. Because when he comes on screen, you can’t look at anyone else. His powerful presence commands your attention. Aditi Rao Hydari, as Khilji’s wife, also delivers a commendable performance, who is aware of her husband’s ruthlessness and yet takes a few bold steps against him. There is Jim Sarbh as well, playing Khilji’s manservant, a eunuch who is in love with Khilji and is a party to his plunder and ruthless killing. Sarbh shines in parts, hams in the rest.

Padmaavat is also the most crisp film that Bhansali has directed in a long time. He wastes no time in establishing the plot and the narrative moves pretty swiftly. They could have done away with two songs in the second half though, where the story drags massively.

Music always remains a high point in Bhansali’s film but the Padmaavat songs aren’t too memorable apart from the Ghoomar song which is visually stunning. Ek dil ek jaan, the romantic ballad is the only other song that stands out. Otherwise the musical is actually dismal.Padmaavat also has the usual trappings that every Bhansali film has. There will always be a holi sequence, with colours amply thrown in the air, there will always be a sequence of a huge group of women dressed in red to add more drama and he always has Ranveer in a solo song- even though the song makes the least sense in the narrative.

Most people in this country will watch Padmaavat, I know. Ironically, Karni Sena has ensured that the film gets the audience in theaters. And most will not be disappointed. The story may be a very known one, some may also object at how it shows a woman’s fate being decided by two men (if this is not patriarchy, then what is?) but everyone will agree that Bhansali’s cinema is grand, spectacular and never really maligns the Rajputs. People will surely come out wondering what the fuss was all about in the first place. Above all, Padmaavat will reiterate the fact that Ranveer Singh can perform any role with absolute finesse.

Yes, they should have just called the film Khilji.