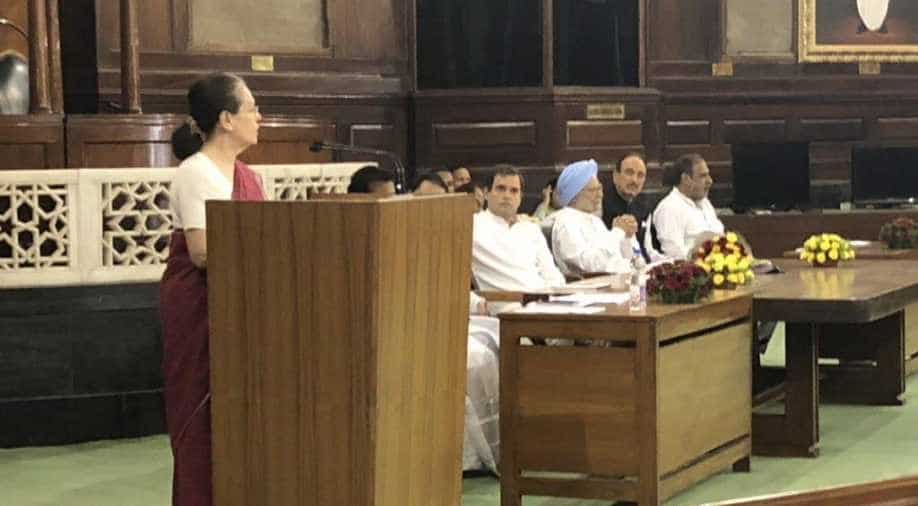 Sonia Gandhi has been elected as Chairperson of Congress Parliamentary Party. Photograph:( ANI )

Besides electing a new leader, the MPs will chalk out the party's strategy for the upcoming session of Parliament.

Gandhi was elected as CPP leader at the first meeting of newly elected Congress Lok Sabha MPs began at the Central Hall of Parliament.

Sonia Gandhi is the current chairperson of CPP.

She says, ‘we thank the 12.13 Cr voters for reposing faith in the Congress Party’. pic.twitter.com/H4z9i3dN8B

All 52 Lok Sabha MPs of the Congress were present at the meeting, besides its members in the Rajya Sabha, sources said.

Besides electing a new leader, the MPs will chalk out the party's strategy for the upcoming session of Parliament, they said.

They will also elect the Congress leader in Lok Sabha.

This will be the first official meeting that Congress president Rahul Gandhi will attend after the May 25 meeting of the party's working committee, where he had offered to quit as Congress chief.

The CWC has already rejected his offer to resign and unanimously passed a resolution authorising him to bring structural changes in the party at all levels in a bid to revamp it.