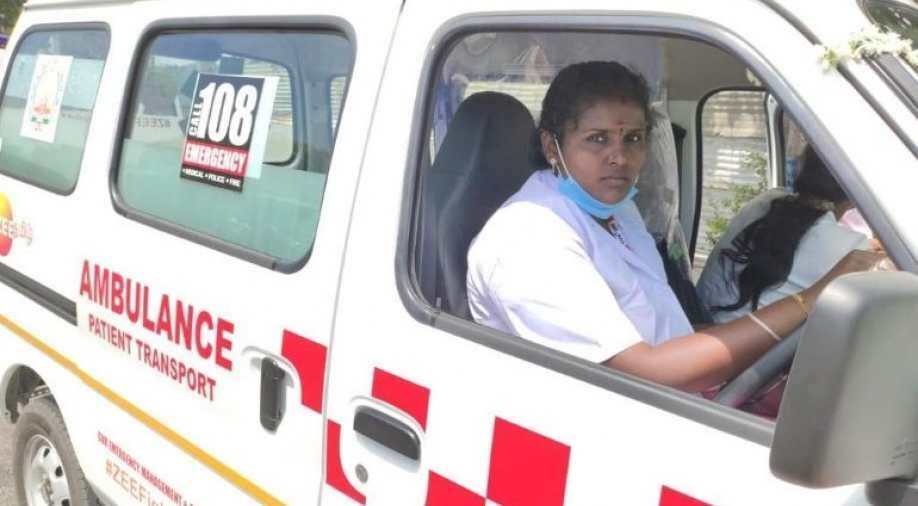 As the Chief Minister of Tamil Nadu flagged-off 118 ambulances at the secretariat on Monday, Veeralakshmi was among the ambulance pilots who drove past.

With the belief that “there’s nothing in this world that can be achieved by one gender alone”, Veeralakshmi had been ferrying passengers as a cab driver since 2016. But now on, she has a bigger responsibility at hand - to ferry those in need of medical help to the nearest medical facility. She’s Tamil Nadu’s first woman ambulance driver and is said to be the only serving woman ambulance driver in India. She was officially appointed for the job, on Monday, at an event in the secretariat.

As the Chief Minister of Tamil Nadu flagged-off 118 ambulances at the secretariat on Monday, Veeralakshmi was among the ambulance pilots who drove past. But her achievement towered above all, given that she had broken the gender barrier for many more women to follow suit. She drove past the podium on an Ambulance that was donated to the government by the ZEE group as a part of its Corporate Social Responsibility initiative.

The vehicles are meant to bolster the state’s effort in the fight against the deadly Covid-19 pandemic. 18 of the ambulances that were flagged-off, were donated to the Government by the ZEE Group as part of its Corporate Social Responsibility (CSR) initiative. These 18 are the first batch, among the total 45 ambulances that the media conglomerate would be handing over to the government.

A diploma-holder in automobile engineering, Veeralakshmi took to driving with the support of an NGO that works for women-empowerment. “About 6 years ago, an NGO supported me in getting the license and since then I’ve been driving different categories of vehicles and ferrying passengers. I’ve driven an Indica and a Swift Dzire and later also got my heavy vehicles license. Finally, it was this experience that also helped me land the new job” she told WION.

It was after the pandemic struck that she was forced to look for other jobs to support her family of four, as her cab-driver husband was also out of regular work amid the lockdown. That was what led her to apply for the ambulance-pilot job vacancy. With all relevant parameters being met, she was selected for the job and offered basic training, ambulance driving lessons, and first-aid lessons.

“The ambulance provided by Zee, which was flagged off by the Chief Minister is the first one that I drove and am confident of handling the other variants as well. I am very happy on having been selected for the job. This is a new task and comes with a huge responsibility and challenge, but I am ready to work hard and deliver” she says confidently.

Veeralakshmi adds that her son is too young to understand that she’s an ambulance-pilot, whereas her daughter knows that she ferries passengers. “People have always questioned me for having chosen to be a driver, but I believe that with adequate training and hard-work anyone can do it, irrespective of gender. When we can provide for our family and also motivate others by walking a different path, there's no reason to hesitate” she signs off, raring to go,save lives.