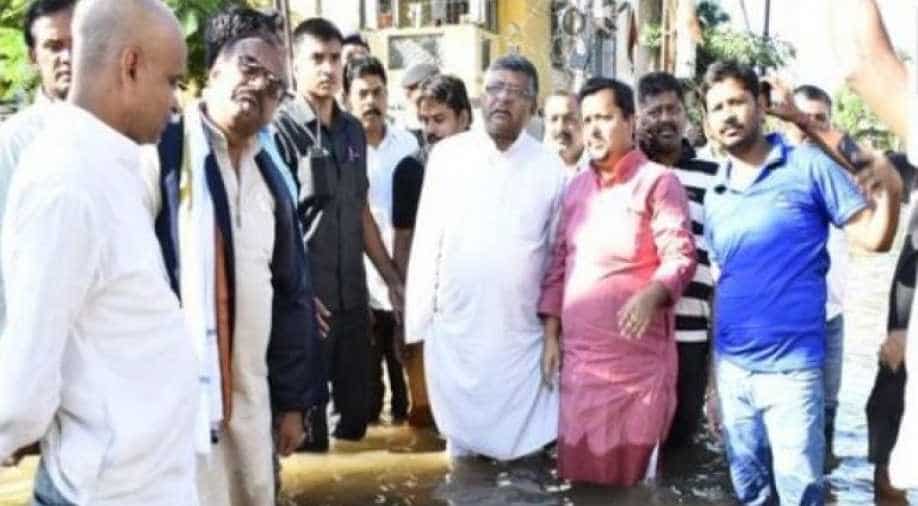 The Union Minister said the administration is active and added that Coal India Pump has been installed which will help in speedily receding the water level.

The BJP leader interacted with the officials and enquired about the status of relief work being carried out.

"The level of water has receded a little. People told me that fogging should be done. I told the Collector Sahib, Patna who was there with me on the boat to complete the fogging. Rest, people are getting water and milk. There is no complaint in this regard," he said while speaking to reporters.

The Union Minister said the administration is active and added that Coal India Pump has been installed which will help in speedily receding the water level.

"I have visited all the areas of Kankarbag. The water has receded there to a great level. The biggest challenge is regarding health. Bleaching, fogging should be done...The administration is preparing a plan regarding that. As soon as the water level recedes, work will begin on it," he said.

When asked about the electricity problem being faced by the residents, he said, "Electricity department says --when there is water, there are chances of electrocution...so we have to save lives of people as well. As soon as the water level recedes, the electricity supply will resume."

The Minister also appreciated the authorities including the NDRF and SDRF for their work.

The MP from Patna Sahib constituency said he was pained, noting that it was his responsibility to be with the people.

"I am pained. I am with my people. That is why I am here for the last four days. It is my responsibility. The central government is with Bihar and people of Patna so that they get relief as soon as possible," he said.

The National Disaster Response Force (NDRF) has rescued over 10,000 people from state capital Patna which has been reeling under floods since the last few days, NDRF Commandant Vijay Sinha said on Wednesday.

Speaking to ANI, Sinha said, "NDRF has rescued 10,000 people, so far. Relief material distribution and their need for food are also being addressed."