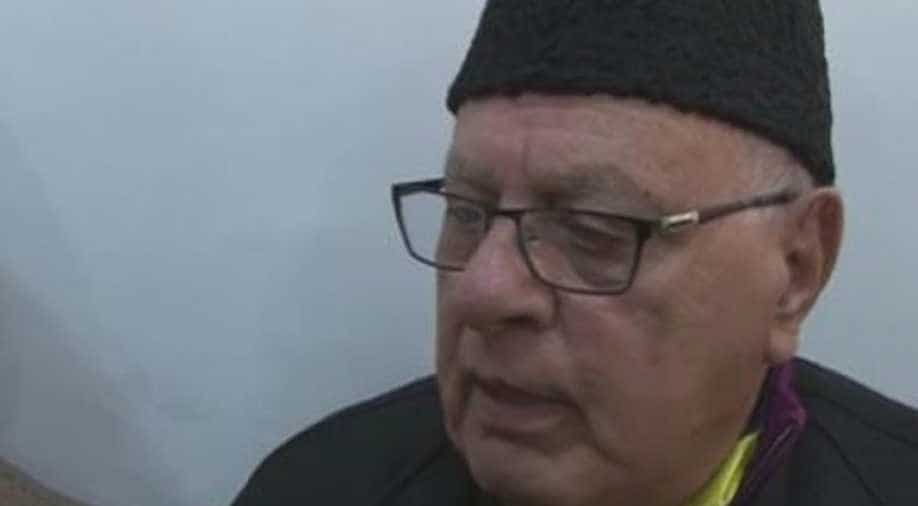 He also stated a Pakistan minister saying that India needs to remember Instrument of Accession if they claim authority over Pok. Photograph:( ANI )

Opposition National Conference president Farooq Abdullah on Saturday claimed that Pakistan-occupied Kashmir (PoK) belongs to Pakistan and "this won't change" no matter how many wars India and Pakistan fight against each other.

Talk of an independent Kashmir was "wrong" as the Valley is landlocked and surrounded by three nuclear powers -- China, Pakistan and India.

His statement comes days after Pakistan Prime Minister Shahid Khaqan Abbasi had rejected the idea of an "independent Kashmir", saying it was not based on "reality".

"I am saying that there is nothing like the issue of freedom (independent Kashmir) here. We are landlocked. On one side we have China, Pakistan on the other side and India on the third side," the MP from Srinagar told reporters on the sidelines of a function at the party headquarters here.

I can't comment much on that. He has held talks but talks alone is not the solution. This issue is between India & Pakistan. Indian govt must also hold talks with Pakistan govt because a part of Kashmir is also with them: Farooq Abdullah on J&K Interlocutor Dineshwar Sharma pic.twitter.com/PrAWB79j6j

"All three of them have atom bombs. We have nothing except Allah's name," he said.

"Those (separatists) who are talking about Azadi, are talking wrong," the former J&K chief minister said.

On the demand for autonomy, he said that while the state decided to join India out of love, the country "betrayed" the people of Kashmir and did not treat them well.

"We should understand that there has been a decision (of accession), but India didn't treat us well. India betrayed us. They did not recognise the love with which we chose to join them. That is the reason behind the current situation in Kashmir," Abdullah said.

"Internal autonomy is our right. They (Centre) should restore it. Only then the peace will return (to the Valley)," he said.

A Pak Minister very rightly said that you forget that the part which is yours was acquired by an Instrument of Accession. You forget Instrument of accession & say that the part is yours. If you talk about this being your part then remember the Instrument as well: Farooq Abdullah pic.twitter.com/tuBpr4cd5D

Referring to a statement made by Minister of State for Home Hansraj Ahir about PoK being part of India, Abdullah invoked the instrument of accession signed by the then Maharaja Hari Singh, with the Indian government.

"You do not remember the instrument of accession and claim the other side of Kashmir administered by Pakistan. If that side is ours, then you should talk about the accession as well. Why do you forget the conditions on which we have acceded?" he said.

Abdullah also claimed that PoK was part of Pakistan and would remain so.

"I tell them in plain terms -- not only the people of India, but also to the world -- that the part (of J&K) which is with Pakistan (PoK) belongs to Pakistan and this side to India. This won't change. Let them fight how many wars they want to. This won't change," Abdullah said.

The part which is with Pakistan belongs to Pakistan & this is India's part. If they want peace govt will have to talk to Pakistan & conclude that an autonomy be given to us as well as them: Farooq Abdullah pic.twitter.com/5bL0loxtBs

"And when the situation is such, then they have to talk, so that we live in peace, both parts live in peace and for that it is imperative to grant autonomy to both the parts," he said.

Asked whether the visit of the Centre's special representative for Kashmir Dineshwar Sahrma to the state was successful, Abdullah said only Sharma could say anything about it.

"I can only say that while he has held talks, only talks will not address the issue as this issue is between two countries -- Pakistan and India. The government of India has to talk to the government of Pakistan as a part of J&K is with them (Pakistan)," he said.