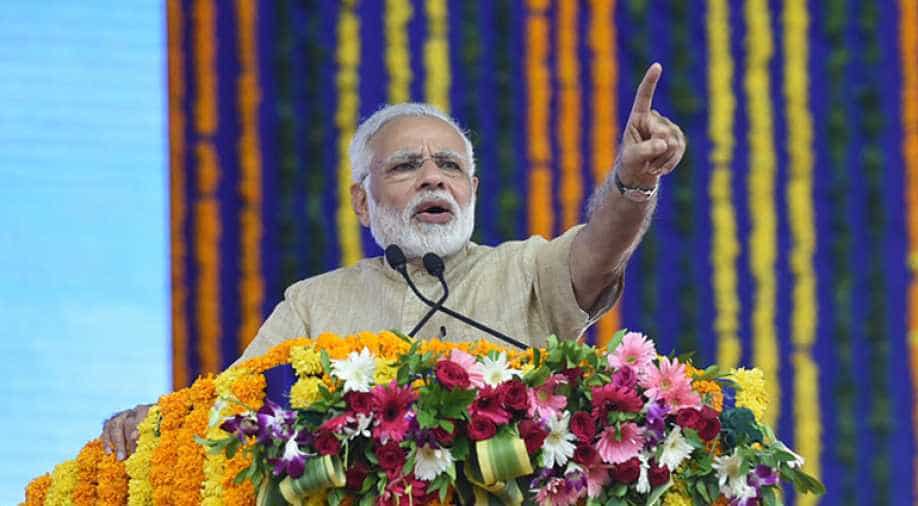 Prime Minister Narendra Modi will visit Bihar tomorrow to attend the centenary celebrations of the Patna University and launch several development projects worth over Rs 3,700 crore.

This will be the prime minister's first full-fledged official tour to the state since the BJP became a part of the ruling coalition in Bihar in July this year.

In August, Modi along with Chief Minister Nitish Kumar had made an aerial survey of the flood-hit districts of Bihar.

After attending the Patna University function, the prime minister will fly by helicopter to Mokama, which is in Patna district about 100 km from the capital city.

Modi will launch a number of development projects there.

The state BJP president has been hinting that a bonanza was on the cards, terming the prime minister's visit as a "Diwali gift" to the people of Bihar in general and Mokama in particular.

At Mokama, Modi will lay the foundation stone for four Rs 3031 crore national highways projects and as many sewage treatment plants (STPs) and related works worth Rs 738.04 crore tomorrow, an official statement said.

Union road transport minister Nitin Gadkari, who also holds the portfolio of water resources, will accompany the prime minister for the ceremony.

The four highway projects for which the foundation stone will be laid, include the four-laning of Aunta-Simariya section of NH-31 and the construction of six-lane Ganga Setu at a cost of Rs 1,161 crore.

The sewerage projects include the development of STPs and related network at Beur and Saidpur. These will create a capacity of treating 120 million litres daily (MLD), the statement said.

The project also includes upgradation of existing 20 MLD-capacity system. Besides, sewer network of 234.84 km will also be developed in the Beur and Saidpur zones, the statement said.

In Patna, seven other sewerage projects are already at various stages of implementation.

"Considering the existing treatment capacity of the city and existing waste generation and (estimated) waste generation till 2035, a total of 11 projects under World Bank funding are sanctioned for six zones which will create a total of 350 MLD of STP capacity and will lay down 1140.26 km of sewerage network at a cost of Rs 3582.41crore," the statement said.

After completion of these 11 projects, Patna will become a town having 100 per cent sewerage infrastructure and no sewage water will drain into Ganga, it said.

The impoverished state has high hopes from the prime minister, who had announced a "package" of Rs 1.25 lakh crore in 2015.

Meanwhile, tight security arrangements were in place for the prime minister's visit.

Additional Director General of Police (Headquarters) said seven Superintendents of Police and 12 deputy SPs had been deployed to oversee the security arrangements and regulation of road traffic during nearly five-hour stay of the prime minister in the state.

"Four companies of the Bihar Military Police and a Quick Response Team comprising eight units of Special Task Force and two of Anti-Terrorist Squad have also been deployed," he said.

"Special arrangements have been made for Mokama where one company of CRPF and two units of STF will be assisting the local police in maintaining security," Singhal said.

Preparations were also in full swing at the Patna University for Saturday's function.

However, a minor controversy has erupted with actor-turned-politician and local BJP MP Shatrughan Sinha raising the issue of not being invited to the programme despite being a Patna University alumnus.

Sinha has also questioned the rationale behind the exclusion of senior BJP leader Yashwant Sinha and RJD chief Lalu Prasad from the function despite being university alumni.

Patna University Vice-Chancellor Rash Bihari Prasad Singh, however, sought to clear the air over the issue, claiming that the "printing of invitation cards got delayed and that's why cards have not been sent to them. But, they are very much in our guest list".