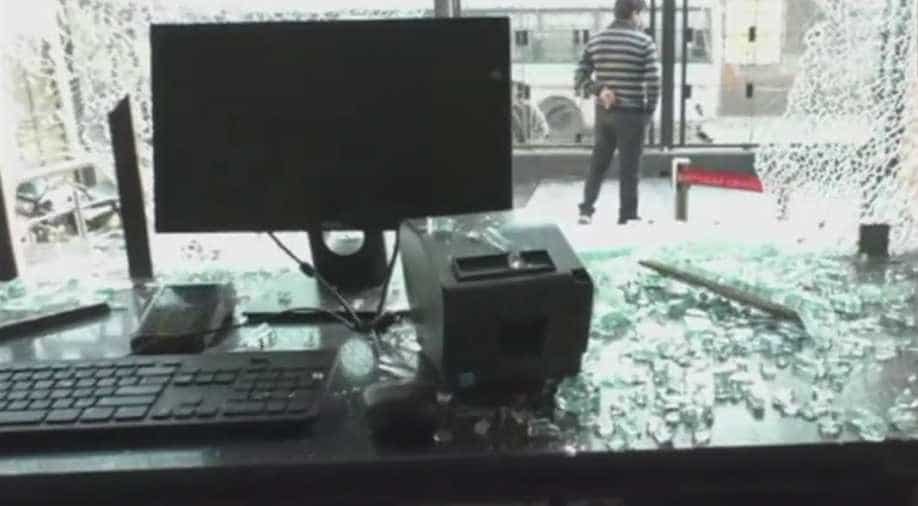 The ticket counter of a cinema hall in Hapur was vandalised by unidentified miscreants. Photograph:( ANI )

Unidentified miscreants on Monday vandalised a ticket counter in Hapur, Uttar Pradesh in protest against the upcoming release of the film "Padmaavat."

On Sunday, members of the Shri Rajput Karni Sena and other Rajput organisations damaged toll plaza counters at DND flyway connecting Noida to Delhi and set a barrier ablaze.

Earlier this month, the Rajput Karni Sena had vandalised a school in Madhya Pradesh for their students performing to the song "Ghoomar" from the film.

Yesterday, the Karni Sena threatened "janta curfews" in cinema halls across the country if "Padmaavat" was released.

The Karni Sena had previously vandalised the film's sets in Jaipur and allegedly assaulted the film's director Sanjay Leela Bhansali.

The Karni Sena, several Rajput fringe groups and some leaders of the BJP are opposed to the film on the grounds that it violates Rajput sentiments, a claim that Sanjay Leela Bhansali has repeatedly rubbished.

The Supreme Court has stayed a ban on the film by the states of Gujarat, Rajasthan, Haryana and Madhya Pradesh, stating that it is the responsibility of the governments to maintain law and order and allow the film's screening.

"Padmaavat", which stars Deepika Padukone, Ranveer Singh and Shahid Kapoor, is set for release on January 25.