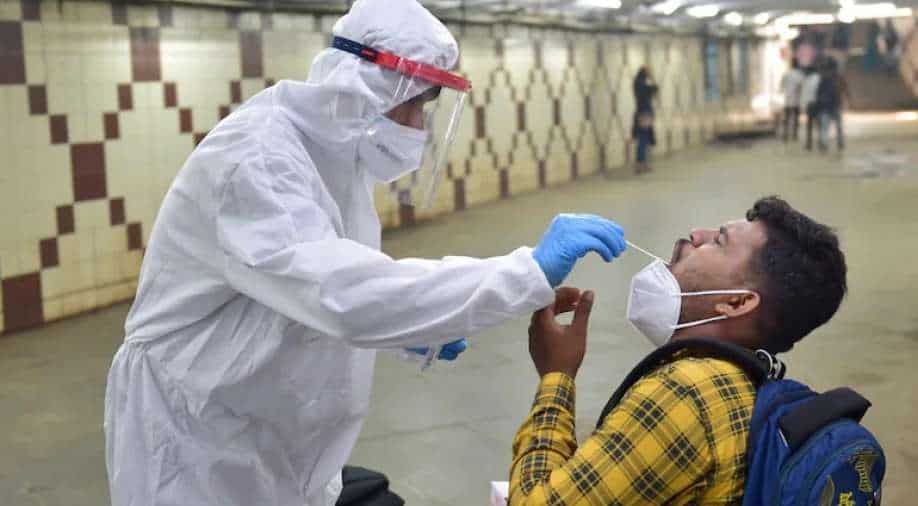 (File photo) Both the cases have been reported from India's southern Karnataka state Photograph:( PTI )

Both the cases have been reported from India's southern Karnataka state. Two men, one 66 years old and the other 46 years old, have tested positive. According to Bengaluru civic authorities, the 66-year-old foreigner had come to Bengaluru on November 20 from South Africa, while the 46-year-old is a health worker from Bengaluru. The foreigner was fully vaccinated, whereas the other had received one dose.

India's health ministry urged responsibility, not fear, as it confirmed on Thursday that two cases of Omicron variant of coronavirus have been found in the country.

Both the cases were reported from the southern Karnataka state. Two males, aged 66 and 46, have tested positive.

The foreigner was fully vaccinated, while the other had received one dose.

"Three primary contacts and two secondary contacts of the 46-year-old male tested positive between 22nd and 25th November. All are isolated," the civic authorities said in a statement.

"Two people found positive for the Omicron variant of COVID19. One person is about a 66-year-old, South African national, who has gone back. Another person is a 46-year-old doctor. He doesn't have any travel history," Karnataka's health minister Dr K Sudhakar said.

"Out of his (doctor's) primary & secondary contact, five people tested positive for COVID-19. So, a total of six people have been isolated and admitted to a government hospital. None of them are showing any serious symptoms. All these people are fully vaccinated," he added.

The minister further said that the foreigner has left for South Africa via Dubai, adding, "He had presented a negative certificate for the virus from a private lab. His primary and secondary contacts (total 264) were found negative. So, it means to say that his certificate may be true."

Symptoms of the two patients have been mild, according to the officials.  All cases reported till now have not been found with any severe symptoms, they said.

“All Omicron related cases are found to have mild symptoms so far...In all such cases in the country and across the world so far, no severe symptom has been noted. WHO has said that its emerging evidence is being studied,” Lav Agarwal, Joint Secretary, Union Health Ministry, said.

"We need not panic about Omicron detection but awareness is absolutely essential. Follow Covid-appropriate behaviour and avoid gatherings," said Balram Bhargava, director general of the Indian Council for Medical Research (ICMR), adding that increased COVID-19 vaccine uptake was the need of the hour.

"Do not delay in getting fully vaccinated," he said.

The government stated that 373 cases of Omicron variant of SARS-CoV-2 have been detected in 29 nations so far and India was monitoring the situation.

Also read | Omicron chaos: A list of countries that have reported cases of new variant

All "at-risk" flights incoming are first thermal-screened and RTPCR test is being done on them. Till now 10 positive cases have been found in those who arrived from at-risk countries. They have been genome-sequenced and monitored.

“Omicron's characteristics and impact are still being researched. Diagnostic tests are working," he said, adding that vaccinations will be protective.

The officials said that Omicron's characteristics and impact are still being researched, adding that diagnostic tests are working and vaccinations will be protective.

They noted that the countries that have taken the restrictions lightly are now re-introducing measures.

Noting that masks are very important, the officials urged to keep using them and avoid crowds and stay in ventilated places.

Surveillance on International travellers should be increased, while inside the country, clusters should be properly monitored, they added.