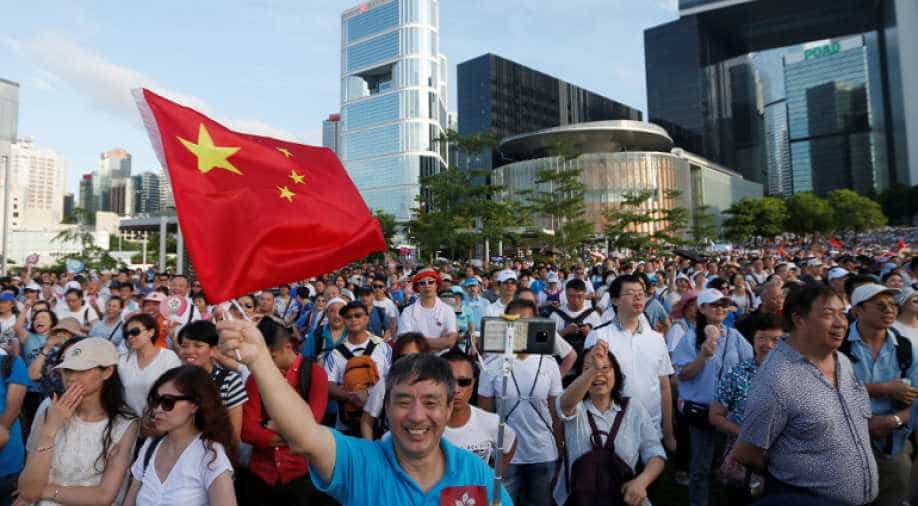 A supporter holds a flag as he attends a rally to show their support for the police amid criticisms for its alleged mishandling of an anti-extradition protest, in Hong Kong, China June 30, 2019. Photograph:( Reuters )

Police in Hong Kong used pepper spray and batons against anti-government protesters who had seized highways early Monday ahead of what is expected to be a huge pro-democracy rally on the anniversary of the city's handover to China.

Remain engaged in North Korea but firm on sanctions ahead of denuclearisation: Pompeo

US President Trump became the first sitting US president to set foot in North Korea on Sunday when he met its leader, Kim Jong Un, in the Demilitarized Zone (DMZ) between the two Koreas and agreed to resume stalled nuclear talks.

Rohit Sharma admitted there were "lessons" to be learnt from England's bowlers after India suffered their first defeat of this World Cup against the hosts on Sunday.

"The Dallas County Medical Examiner has confirmed 10 fatalities and no survivors," a spokeswoman for the town of Addison, Texas told AFP.

Around seven people were killed on Sunday as tens of thousands of people took to the streets in Khartoum demanding the ruling military hand over to civilians.