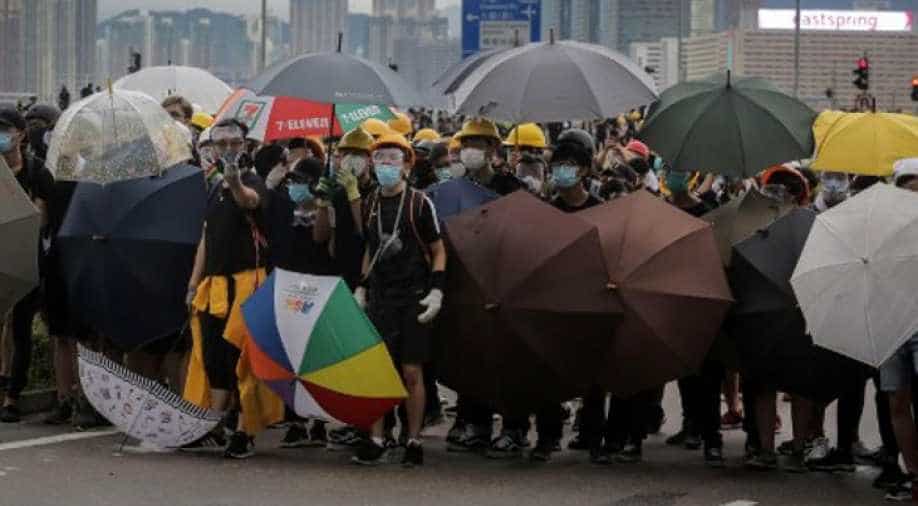 Riot police with helmets and shields faced off against protesters in the Admiralty and Wanchai districts of the city.

Police in Hong Kong used pepper spray and batons against anti-government protesters who had seized highways early Monday ahead of what is expected to be a huge pro-democracy rally on the anniversary of the city's handover to China.

The international financial hub has been shaken by historic demonstrations in the past three weeks, when protesters have demanded the withdrawal of a bill that would allow extraditions to the Chinese mainland.

Riot police with helmets and shields faced off against protesters in the Admiralty and Wanchai districts of the city.

Shortly before a flag-raising ceremony to mark the handover, police swooped on protesters who had blockaded one street. At least one woman was seen bleeding from a head wound after the clashes and police made multiple arrests.

The ongoing rallies are the latest manifestation of growing fears that China is stamping down on the city's freedoms and culture with the help of the finance hub's pro-Beijing leaders.

Although Hong Kong was returned from British to Chinese rule on July 1, 1997, it is still administered separately under an arrangement known as "one country, two systems".

The city enjoys rights and liberties unseen on the autocratic mainland, but many residents fear Beijing is already reneging on that deal.

Pro-democracy activists have organised a march every handover anniversary, calling for greater democratic freedoms - such as the right to elect the city's leader.

They have mustered large crowds in recent years - including a two-month occupation in 2014 - but have failed to win any concessions from Beijing.

This year's rally comes against the backdrop of unprecedented anti-government protests over the past three weeks that have drawn millions, and with the public angry over police using tear gas and rubber bullets to clear crowds.

The spark for the current wave of protests was an attempt by chief executive Carrie Lam to pass the Beijing-backed extradition law, which she has now postponed following the huge public backlash.

The demonstrations have since morphed into a wider movement against Lam's administration and Beijing.

Lam - who has kept out of the public eye since her climbdown and has record low approval ratings - attended a flag-raising ceremony on the harbourfront early Monday, marking the moment the city returned to Chinese ownership 22 years ago.

But she and other dignitaries observed from inside due to "inclement weather" - the first time in the ceremony's history.

Her speech, which stuck to the conciliatory tone she has used in recent weeks, was briefly interrupted by an opposition lawmaker who shouted protests and was removed.