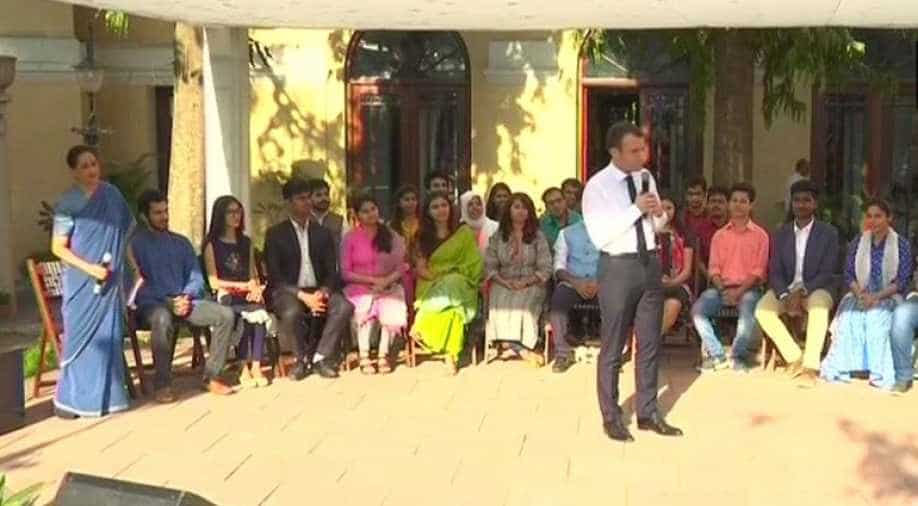 French president Emmanuel Macron, who is on a four-day visit to India interacted with Indian students at New Delhi's Bikaner House.

The French president said there was a need for more exchange between the French and the Indian people and students and that he wanted most of the researchers from India to come to France.

"I think we need more exchange between our people, our students. I want most of the researchers to come to France and I am happy to be here today," Emmanuel Macron said.

The French president said he wanted to double the number of Indian students coming to France.

The French president said the countries were in the middle of a digital revolution and climate change and more speed was required.

"We're in the middle of revolution on digital era and climate change. We need more speediness. What we need is a change in mindset, facilitate entrepreneurship, increase risk takers' numbers. Artificial Intelligence is big game changer but you need to start it from the ground," the French President said.

President Macron told students that most of the issues on climate and terrorism were because of the short-term vision of most of the leaders who were "greedy".

"Most of the issues we have today, on climate, on terrorism are because of the short-term vision of most of the leaders. They were greedy," the French President said.

Earlier on Saturday, India and France signed as many as 14 bilateral agreements aimed at boosting ties at the Hyderabad House in the national capital.

According to reports, around 200 million euros of investments will be made in India.

A so-called "Industrial Way Forward Agreement" was signed between French utility EDF and India's NPCIL for the construction of six nuclear reactors at Jaitapur.

While issuing a joint statement, Prime Minister Narendra Modi said the two countries share a 20-year-old strategic partnership and have made efforts to strengthen people to people ties.

The French President, who is travelling with his wife Brigitte and delegation of businessmen and ministry officials, will tour India from March 9 to March 12.

He is also expected to make a visit to Taj Mahal and on Monday will head to Varanasi where he will be accompanied by PM Modi.

Macron last visited India in 2016 when he was invited to be the chief guest of Republic Day celebrations.