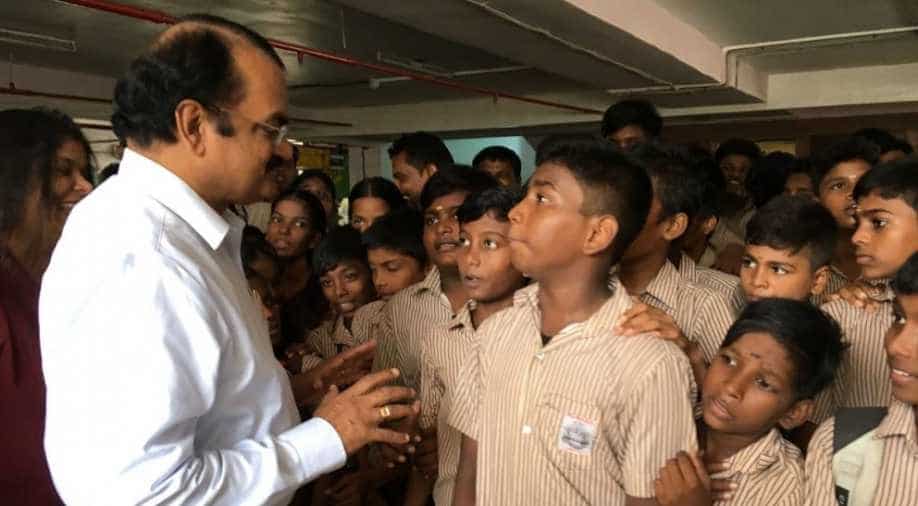 The students who had gathered at the theatre erupted in cheer and jubilation on seeing Dr Mylswamy Annadurai.

What if we were to watch a movie that was inspired by true events while being seated along with the person or the team whose achievement the film is based on?

It was the same exhilarating feeling that swept nearly 100 students and faculty of Chennai’s MCN government-aided school while watching the film ‘Mission Mangal’ along with Padma Shri Dr Mylswamy Annadurai, the Programme Director of Mangalyaan or India’s Mars Orbiter Mission. Read the film's review here.

Aimed at arousing the children’s curiosity and interest in Space science and its applications, the screening was organized by SpaceKidz India at a private theatre in the city. The Spacekidz team has launched 9 balloon satellites, 2 sub-orbital satellites, and 1 orbital satellite.

The students who had gathered at the theatre erupted in cheer and jubilation on seeing Dr Mylswamy Annadurai who was accompanied by his wife.

When he quizzed them about the movie that they were to watch, the students enthusiastically replied ‘Mangalyaan’ and ‘Mars Mission’ and ‘Red Planet’. “I had heard of this movie on our Mars Mission that had received a good response, but like you, I am also watching it for the first time. You children need to understand the opportunities available in India in the field of Space technology and its allied streams”, he told the students.

Speaking to WION after the screening, Dr Annadurai said, “the theme of the film looks reasonably good and certain portions were depicted creatively, while some parts are very dramatized as is the case with commercial cinema. The larger than life effect of the cinema had a great impact on the kids and they were cheering and clapping.”

He appreciated the film for having juxtaposed and the failure of the Russian and Chinese missions, with the Indian mission that succeeded in its maiden attempt.

“Many actions and dialogues delivered by the protagonists were uttered by me during the mission - like the cake cutting scenes, shouting at the team and later appreciating them. However, the pub sequence, smoking and the role of a NASA scientist in the ISRO mission are far from reality”, he said.

When asked if the film got him emotional, he reminisced, “nobody believed that PSLV could be used for a Mars mission as the rocket could only lift 1.35 tons, and the satellite alone would need to carry 850 kilograms of fuel and the equipment needed to weigh within 500 kilograms in order to be launched. We also had to get the job done within the available budget and in the stipulated timeframe. When everybody thought it was impossible, we made the team believe that it was possible to succeed.”

Speaking to WION on the sacrifices made by the family, Vasanthi Annadurai, the scientist’s wife recalled that this was their first movie in over two years. “During the missions, he used to spend entire months in the Satish Dhawan Space Center at Sriharikota and that is the nature of the ISRO scientist’s work. Once when he had a fracture in his leg in the middle of a crucial mission, he went to work the next day on a wheelchair,” she told WION.

Dr Srimathy Kesan, CEO of Spacekidz said, “People should understand that scientists are also human beings with an emotional side and like us all, they have a kid within them. While watching the scene where some of his own words and phrases were uttered, Dr Annadurai cheerfully said, yes this is how I said it. I wanted every child to see that and watch it with a man behind this mission. That’s a seed sown in their mind”.

As they emerged out of the screening, the kids were visibly elated and inspired. Sarath, a student of class six said that he aspires to be a Space scientist and contribute to India’s progress. Lakshmi, a student of class nine said that she was delighted to see women in the field of space science and serving the country in significant ways.