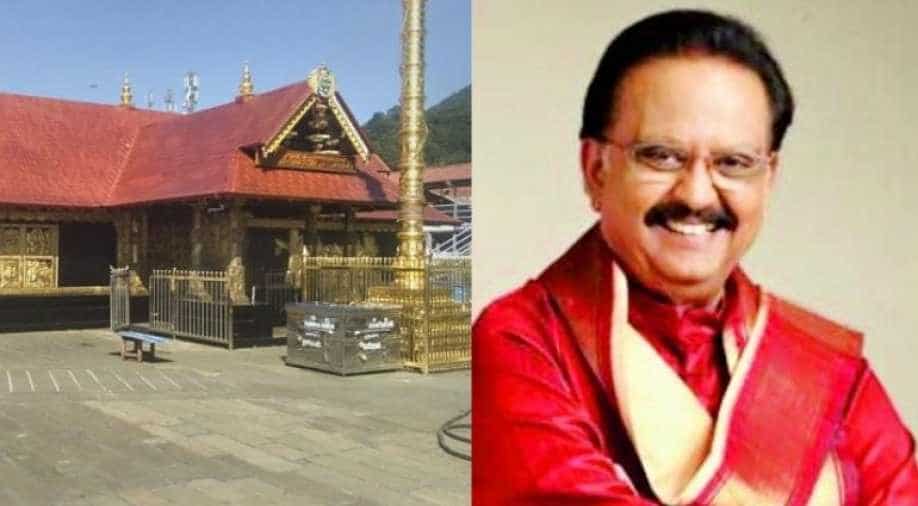 In 2015, he was awarded the ‘Harivarasanam award’ that is instituted by the Kerala Government and the Travancore Devaswom Board, which manages the temple

Among the treasure trove of over 40,000 songs that legendary singer SP Balasubrahmaniam had sung, its not just the film songs that are revered among the masses, SPB’s devotional songs are even part of the morning rituals at several households. In certain cases, it was his voice and soulful renditions in praise of deities that led people from various states to go on pilgrimages to certain temples. It was for this magnificent voice that, even the Sabarimala temple Devaswom Board, despite the strict traditions, on-its-own came forward to perform a historic, first-ever Musical Puja for his recovery.

On August 21st, almost two weeks after the hospitalization of SPB, a decline in his condition, an Usha Puja’ followed by a ‘Gaana-archana’ (Musical offering) was performed for Lord Ayyappa, the presiding deity of the temple. Following the Puja rituals, a musician of the temple’s governing board played the Naadhaswaram, (a wind-based instrument) to the tune of SPB’s national award winning song Shankara Naadhashareera from the film Shakaranbharanam(1979). Though this is a film song, it is dedicated to and sung in praise of Lord Shiva.

Also read: In his youth, SP Balasubrahmanyam aspired for a government job, not a career in music

“This Usha Puja and special ‘Gaana-archana’ is for the recovery and well-being of the great Singer SPB. Cinema stars and commoners are praying for him alike and we have also spoken to his family. Musicians from the temple played three different instruments as a part of the musical offering. Ganesh, a Naadhaswaram player had also played the tune of SPB’s iconic 1979 song which is widely popular across Kerala and all other southern states. Such a musical offering has never been made before, for an individual, at the temple” a Travancore Devaswom Board Official had told WION.

It is notable that the singer had sung several songs in praise of the deity Swami Ayyappa. In 2015, he was awarded the ‘Harivarasanam award’ that is instituted by the Kerala Government and the Travancore Devaswom Board, which manages the temple. The award is given to a person for their contribution to propagate the spirit of secularism, equanimity, and universal brotherhood of Sabarimala through the songs.

SPB’s 2015 visit to the temple to receive the award is said to be his maiden visit and his only one. On receiving the award, SPB had said that music was his mother tongue and also sang his national-award winning song from 1979 - Shankara Naadha Shareera, among other devotional songs. His majestic voice is said to have added to the divine feeling in the forests surrounding the hilltop shrine. He had also said that the Sabarimala Ayyappan temple was a universal place of worship where religion, caste, creed, social status did not matter, thus making it a model for the rest of the world.

Back then, SPB was nearing 70 years of age and was unable to undertake the harsh 5km uphill trek to the temple. Arrangements were made for SPB to be carried all the way to the temple on a ‘Doli”,(A wooden chair connected to two poles on the sides, which can be lifted by four or six bearers). Before sitting on the Doli or the crude palanquin, SPB, is seen bowing down and touching the feet of the bearers (as a mark of respect and devotion) before they are to carry him to the holy place. This gesture, it appears left all the bystanders in shock, awe and admiration.

It is usual that senior citizens and devotees who cannot trek up are carried on a a crude palanquin, by paying the bearers a small fee, but it is rather unusual for anyone to seek their blessings by touching their feet. A video of this incident from 2015 incident is doing the rounds on instant messaging platforms.

The mortal remains of the legendary singer, multiple-national award winner SP Balasubrahmanyam, who breathed his last on Friday after a 50 day hospitalization due to Covid-19, was laid to rest with Police honours, at the family’s farmhouse in Thamaraipakkam, in the outskirts of Chennai, on Saturday afternoon. The singer’s family performed the final rituals and as per family tradition, lowered the mortal remains into a dug-up pit. Thousands of fans had gathered to bid a teary farewell, to a man whose soulful, passionate renditions had been a part of their joys and sorrows over the last five decades.

While announcing the unfortunate news of his demise,SPB’s son Charan rightly said, “SPB belongs to everyone, he will live on via his songs… Until all of you (fans and well-wishers are here), we consider that Appa(father) is alive”.