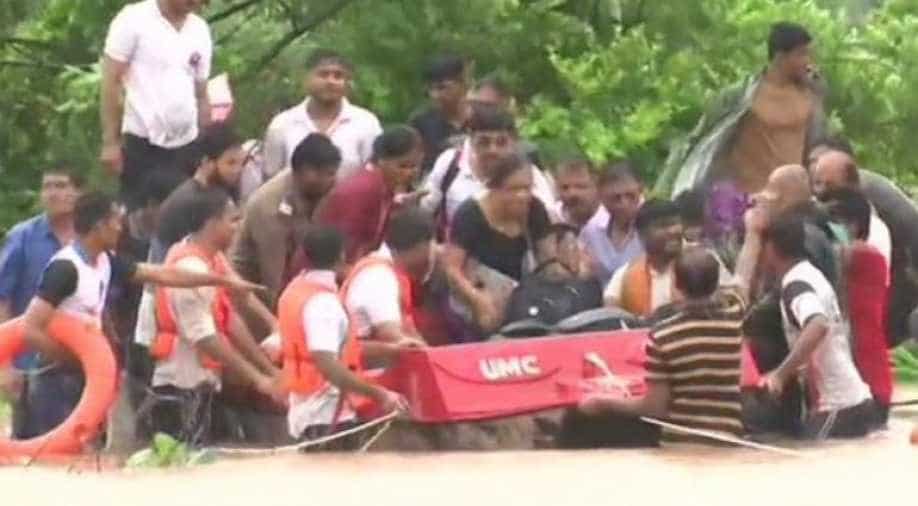 500 people have been rescued till now. Photograph:( ANI )

Meanwhile, Union Minister of State for Home Affairs Nityanand Rai spoke to Fadnavis and assured all assistance from the government's side.

Chief Minister Devendra Fadnavis on Saturday instructed the Chief Secretary to personally monitor rescue operations at Vagani, where people are stranded on board Mahalaxmi Express.

"Four National Disaster Response teams are currently evacuating passengers with the help of eight boats. In addition, seven teams of the Indian navy, two helicopters from Indian Airforce and two military columns have been deployed with the local administration," the Chief Minister said in a statement.

"Two additional military columns are on the way and the situation is under control", he added.

Meanwhile, Union Minister of State for Home Affairs Nityanand Rai spoke to Fadnavis and assured all assistance from the government's side.

As torrential rains continue to batter Mumbai, Mumbai-Kolhapur Mahalaxmi Express, with 700 passengers on board was held up between Vangani and Badlapur since 3am this morning.

Railway Protection Force and City police had reached the site where the train is held up, and biscuits and water were being distributed to the stranded passengers.

CPRO Sunil Udasi had appealed to passengers not to get down from the train and await advice from the NDRF and other disaster management authorities.

500 passengers have been rescued so far and are being lodged at safe places, from where they will be moved to Badlapur, he added.