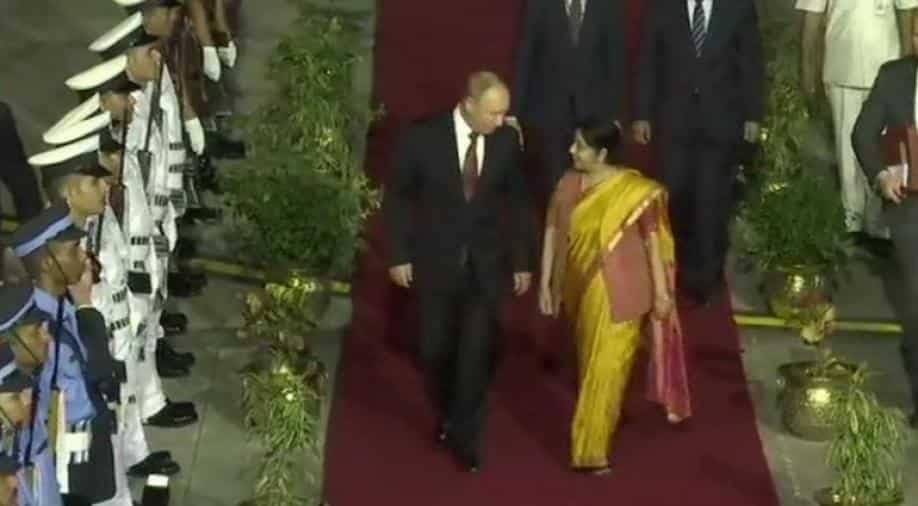 Vladimir Putin is received by Sushma Swaraj on his arrival to India. Photograph:( ANI )

President Vladimir Putin arrived in India today on a two-day visit to as India and Russia seek to cement their relations amid complex regional moves in the Asian region.

President Putin will be signing 20 bilateral agreements with India during his visit including in trade, tourism, energy and space exploration. However, it is the acquisition of the high tech S-400 missile defence missile system which will be the focus of attention during his visit to India. The US already expressed its displeasure at India signing the defence deal with Putin, threatening to impose sanctions under CAATSA.

During his visit, Putin will be meeting President Kovind and hold other official engagements to boost India-Russia ties. US and Russia have been taking potshots at each other for several months now with the Trump administration blowing hot and cold with Putin.

The US had expelled 60 Russian diplomats alleging that they were spies and closed Russia’s consulate in Seattle, siding with the UK over the poisoning of ex-Russian spy Skripal and his daughter. India, on the other hand, has been able to keep its hand on US handle, however, with the imminent signing of the S-400 deal things could change rapidly.

PM Modi had last engaged with the Russian president during the "informal" Sochi summit in May. Modi's boat ride with Putin in the Black Sea had attracted world attention at the time. All eyes with be on PM Modi and President Putin as they engage with each other in New Delhi over the next two days.