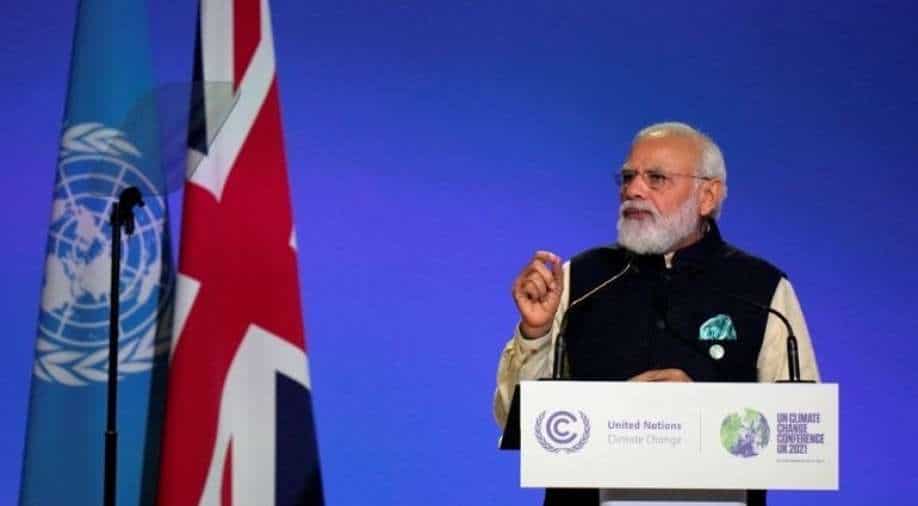 The prime minister said that India is putting climate change at the centre of its policies and that the nation, despite being a developing country, shows the way when it comes to safeguarding planet earth

PM Modi made many big pledges during his National Statement at the COP26 Summit, including attaining net-zero carbon emissions by 2070 and promoting renewable energy sources.

Here's a look at some of the key takeaways from the prime minister's speech at the Summit:

PM Modi delivered a new motto for long-term growth in his address. He stated that 'LIFE,' or Lifestyle for the Environment, might serve as a basis for the same.

"Today's world acknowledges that lifestyle has a significant influence on climate change. In front of you all, I propose a one-word revolution. This is the term LIFE, which stands for "Lifestyle for the Environment."

To ensure a harmonious living with the environment, Lifestyle For Environment is influenced by Indian culture, Gandhi's teachings, and the prime minister's personal life.

This, like previous popular initiatives inspired by the prime minister, encourages intentional and conscious consumption rather than unthinking and harmful consumption.

2: Climate finance and tech transfer as an imperative

The prime minister sent a strong message to rich nations, saying that, just as India has increased its ambition in establishing objectives, they must do likewise in climate funding and technology transfer.

With previous climate finance objectives, the world would not be able to accomplish newer ones, he warned.

"India expects developed countries to make $1 trillion available as climate finance as soon as possible. As we track the progress of climate mitigation, we must also track climate finance. Justice would truly be served if pressure is put on those countries that have not lived up to their climate finance commitments," Modi said.

Delivering the National Statement at the @COP26 Summit in Glasgow. https://t.co/SdKi5LBQNM

India will reach net-zero carbon emissions by 2070, according to Prime Minister Modi.

Not contributing to the quantity of greenhouse gases in the atmosphere is known as net-zero, or being carbon neutral.

Modi has made a historic step in demonstrating India's commitment to combating climate change.

Despite its status as a developing country, India leads the way in terms of environmental protection.

4: Encourage the use of renewable energy

India is now not only on course to meet this goal, but has also opted to increase it to 500 GW.

India has also committed to sourcing 50% of its energy from renewable sources by 2030.

PM Modi stated that despite having roughly 17% of the world's population, India is only responsible for about 5% of global emissions.

6: 'Panchamrit' to deal with the problem of climate change

He also outlined his five-point agenda, which he dubbed the five 'Amrit tattva' (nectar ingredients), to cope with the problem of climate change when speaking at the COP26 meeting.

"Amid this global brainstorming on climate change, on behalf of India, I would like to present five nectar elements, Panchamrit, to deal with this challenge," Modi said.

7:  Reducing carbon emissions and intensity: India not only commits but also acts

PM Modi announced that India will reduce one billion tonnes of carbon emissions from the total projected emissions by 2030. India will also reduce carbon intensity in its economy by 45%.PM Modi shared how India is the only country to fulfil commitments made in Paris. He also spoke about how Paris was not only a summit but a sentiment and a commitment of 1.30 billion Indians.