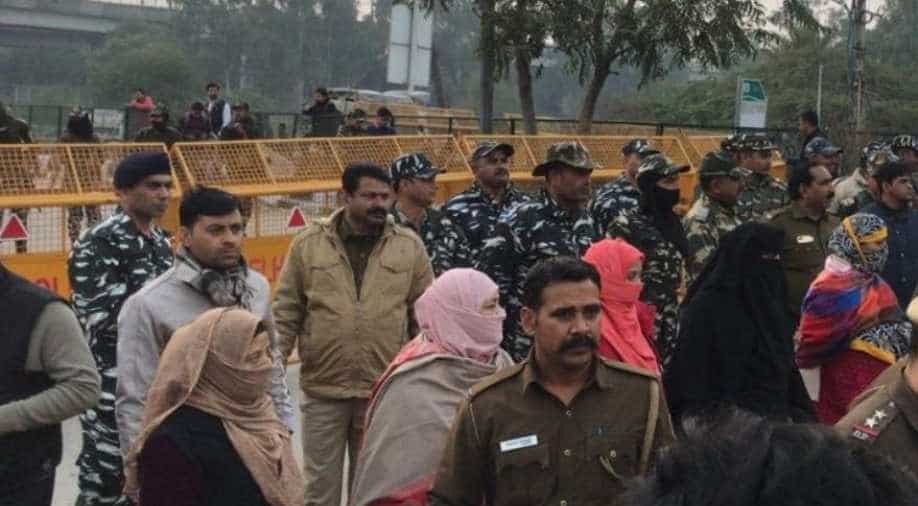 "No permission granted to anyone to hold a demonstration in and around Shaheen Bagh area against the ongoing protest here over CAA." said DCP Chinmoy Biswal.

The protestors raised slogans `Jai Shree Ram` and `Vande Matram` while some were seen carrying Indian flags."No permission granted to anyone to hold a demonstration in and around Shaheen Bagh area against the ongoing protest here over CAA. But still, some people called on the protest today, so, they were stopped and dispersed by police," said DCP Chinmoy Biswal while talking to ANI. This comes a day after a man fired aerial shots at the site of a protest in Shaheen Bagh on Saturday.

The police have detained the man, identified as Kapil Gujjar, a resident of Dallupura village near Delhi-Noida border, said Chinmoy Biswal, DCP, South-East. Gujjar told the police that he was angry with the traffic blockade as his cousin`s wedding is approaching and he had to run around a lot to make arrangements, police sources said.

Protests have been going on at Shaheen Bagh since December 15 last year against the CAA due to which Kalindi Kunj road has been shut for traffic movement.

A petition was filed in the Supreme Court last week seeking appropriate directions to the police to open the Kalindi Kunj-Shaheen Bagh stretch contending that the road closure is causing huge inconvenience to people.

The amended citizenship law grants citizenship to Hindu, Sikh, Jain, Parsi, Buddhist, and Christian refugees from Pakistan, Afghanistan, and Bangladesh, who came to India before 2015.