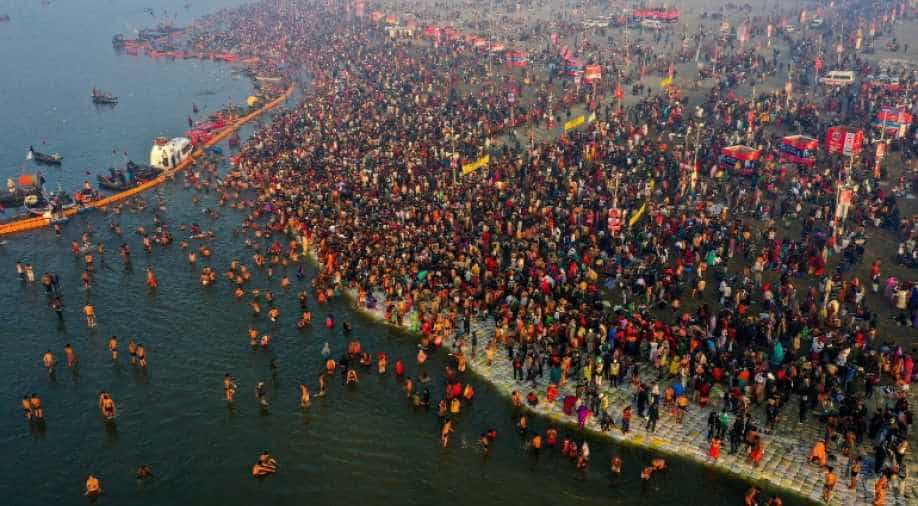 Around 35 lakh devotees have taken a dip so far on the occasion of Paush Purnima. Drone cameras are being used to keep a watch and maintain a vigil over the mela area.

Braving intense chill, around 35 lakh devotees took a dip in the River Ganga here on Monday on the occasion of Paush Purnima - the second auspicious bathing day of the Kumbh Mela.

From Sunday night itself, the Sangam area was buzzing with activity as devotees started arriving even as security forces maintained a close watch on the movement of pilgrims and visitors at the mela venue.

In Pictures: Colours of Kumbh Mela

Even before sunrise, devotees were seen coming out from the ghats after taking the dip.

Around 35 lakh devotees have taken a dip so far on the occasion of Paush Purnima. Drone cameras are being used to keep a watch and maintain vigil over the mela area. Mela adhikaari Vijay Anand told PTI here.

Officials repeatedly made announcements requesting devotees not to venture into deep waters and also keep an eye over suspicious elements in their vicinity and report it to the police.

The full moon was at its splendid best over Sangam before the break of dawn and devotional songs greeted visitors in the Sangam area.

Fog too was seen before sunrise at various places in the Sangam area.

However, it failed to dampen the mood of devotees, who turned up in large numbers for the Paush Purnima bath.

As the day progressed, the number of devotees coming to take the holy dip increased.

The Purnima or full moon day will also mark the beginning of Kalpwas (the period of austerity) at Kumbh Mela.

Elaborating on the significance of Paush Purnima, Swami Adhokshanand said, Paush Purnima is a significant day for Hindus which falls on the full moon day of Paush in the Hindu calendar. On this day, devotees from different parts of the country assemble at Sangam to take a holy dip. Even Lord Krishna had said that in the Hindu calendar, he represents the month of Paush, he said.

Satish Shukla, who had come from Kanpur for the holy dip, said, "Various facilities at the mela venue have improved significantly. River Ganga looks a lot cleaner now as compared to earlier times."

DS Nikam, who had come from Aurangabad with his family for the holy dip, praised the cleanliness at the mela area.

I have been camping here since January 15. Today's bathing experience was really nice and the arrangements were good," he said.

Yesterday, UP Chief Minister Yogi Adityanath had greeted people on the eve of Paush Purnima.

In a statement issued in Lucknow, Adityanath said, Paush Purnima, which is symbolized by 'Jap', 'Tap' and 'Daan', is one of the most ancient parv (festivals) of India.?

Unlike the Shahi Snaans, Makar Sankranti, Mauni Amawasya and Basant Panchami, Paush Purnima is a 'Parv Snaan' (a bathing ritual), and hence the pomp of Akharas leading the bathing procession in the morning was missing, Chairman of Akhil Bharatiya Akhara Parishad Mahant Narendra Giri said.

Uttarakhand Chief Minister Trivendra Singh Rawat was also in Sangam City to extend an invitation for the Kumbh Mela, which will be held in Haridwar later, and met office bearers of various Akharas, Giri said.