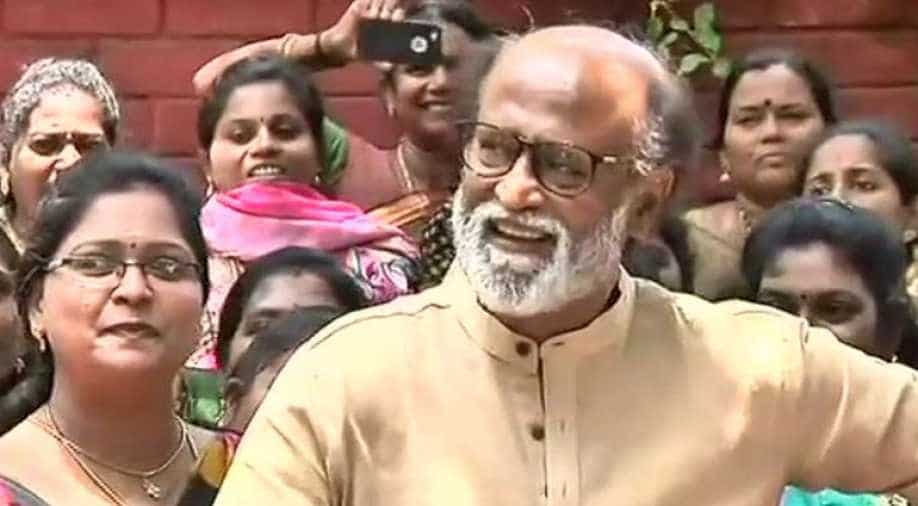 Rajinikanth speaks to the press in Chennai on May 20. Photograph:( ANI )

Reacting to actor-politician Rajinikanth's comments on the release of Cauvery water by Karnataka to Tamil Nadu, JD(S) leader H D Kumaraswamy called him to visit the state and see the situation for himself, after which he would change his stand.

"If there is water in Karnataka it is possible for us to give them water. I request Rajinikanth, please come and see the situation in our dams, what has happened to our farmers. After seeing that, if you (Rajinikanth) still want water, let's discuss," PTI quoted Kumaraswamy as saying.

He was responding to a question about the reported statement by the actor-politician in Chennai asking the new government in Karnataka to release to Tamil Nadu its share of Cauvery river water as mandated by the Supreme Court verdict.

"... On seeing the situation here, I think he (Rajinikanth) will change his stand," the JD(S) leader told reporters here.

Rajinikanth on Sunday said that Karnataka government should implement Supreme Court says and added that it is their (Karnataka’s) duty.

“It is my humble opinion that it will be good if the control over the dams (in Karnataka) is with the (proposed) Cauvery authority,” he said.

Anticipating “government intervention” in the authority that has been mooted, he said, “Let us see what happens in due course.”

Kumaraswamy is all set to take over as the Karnataka Chief Minister on May 23.

As the leader of Congress-JD(S) joint legislature party, he was yesterday invited by Governor Vajubhai Vala to form the government, following the fall of three-day-old BJP government with the resignation of B S Yeddyurappa as Chief Minister.