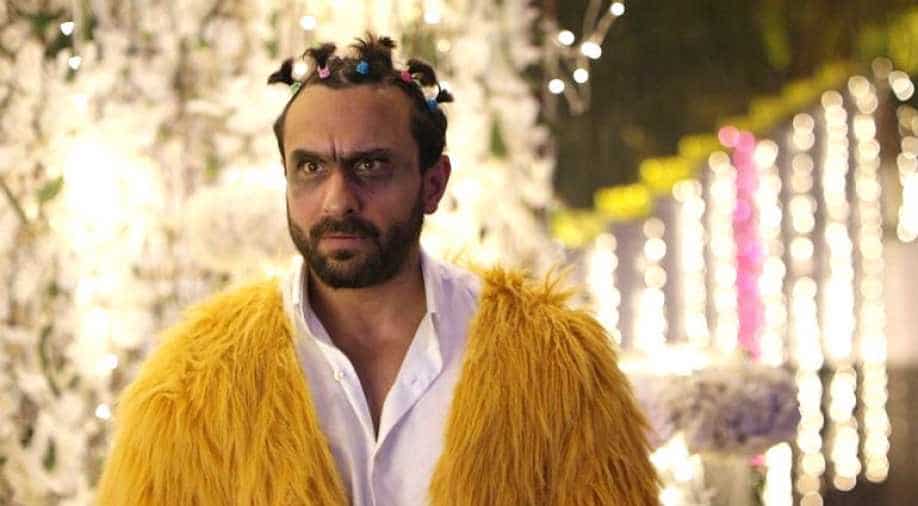 Saif Ali Khan in a still from Kaalakaandi. Photograph:( Others )

Saif Ali Khan has never been used to his full potential. The actor who has time and again proved that given a good role, he can shine (Remember Langda Tyagi from Omkara? ) has been going through a somewhat dry run at the Box Office for many years now. While the films fail to impress, Khan always manages to shine in his role putting in some genuine effort to make his character look believable (barring The Humshakals of course).

Khan's latest Kaalakaandi also falls in the same bracket, unfortunately. A film that could do so much more than what it is, Kaalakaandi only has few sparks in between its 112 hours of narrative but that is not good enough. Saif, on the other hand, shines- like he always does in a poorly written film.

Based on one night in rain-soaked Mumbai, Kaalakaandi has multiple tracks. A couple is on the verge of separating (Kunal Roy Kapur and Shobhita Dhulipala) as the girl is set to fly off to America for her Ph.D. in a few hours. But first, they must head to their friend's (Shenaz Treasurywala in a lovely cameo) birthday party. Two local gangsters (Vijay Raaz and Deepak Dobriyal) plan to steal the money- a hefty sum-that rightfully belongs to their boss and plot a devious plan. A senior vice president of a bank (Saif Ali Khan) discovers he only has a few months to live and diagnosed with stomach cancer on the day his younger brother Angad (Akshay Oberoi) to get married. Angad, on the other hand, wants to get in on with his ex-girlfriend before he gets married.

A loosely written screenplay hampers the narrative of the film majorly. Written and directed by Delhi Belly writer Akshat Verma, the film's first half lacks coherence. One really doesn't know where the film is heading for the longest time. The two gangsters spend too much time just thinking about how to steal the money. No one from home calls when Angad and his elder brother literally disappear for the good part of the night. While all the stories are taking place on the same night, it is not clearly established if they are taking place at the same time. Also, the writer takes too much time to establish each of the plots and at the interval, one still doesn't know very clearly where all the stories are heading.

The dialogues in the film are conversational, which is a good thing and the lines are laced with sarcasm and wry humour and Verma makes Mumbai city also a character in the film. Just a very somber character and not as vivacious as Bollywood projects it to be.

Among the various tracks, the most coherent ones are the one involving Shobita Dhulipala and Kunal Roy Kapur and Saif Ali Khan and a Sheela, a transwoman (Nyaari Singh). In fact, Khan and Singh's track is perhaps the most enjoyable, genuine and entertaining. The two share some hilarious and some poignant moments together. That's one track which deserved a full film perhaps. Roy Kapoor and Shobhita Dhulipala also make for a perfect modern-day couple who rediscover their feelings for each other on that odd night.

The rest of the tracks just seemed to be hurriedly put which is unfortunate because the film does boast of an interesting gamut of stars. It's also a shame that a story which has two bright talents like Dobriyal and Raaz together falls so flat. They are a treat to watch on screen but their track is half-baked.

Khan, on the other hand, plays the haggard nameless man trying to live life to the fullest on that one night with absolute ease. He is drug-induced and Mumbai city lights up for him in such a state and makes him realize that there is so much to do before he signs off for good. His character oscillates between being crazy, vulnerable and goofy and Khan pulls off all the traits perfectly.

Overall Kaalakaandi suffers because of incoherence. It shines in few moments and those involve Saif Ali Khan.