J&K: 'Anyone who has picked up a gun will be killed,' says Indian Army 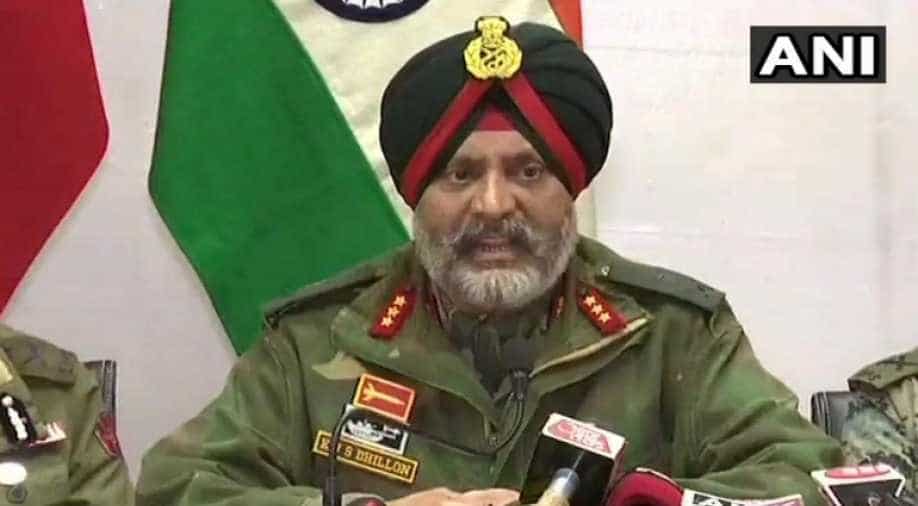 The army added that the security forces had 'eliminated' the Valley's JeM leadership, which had claimed responsibility for the Pulwama attack, in less than a 100 hours.

The Indian Army said Tuesday that "anyone who has picked up a gun (in Jammu and Kashmir) will be killed". The statement was made by Kanwal Jeet Singh Dhillon, Corps Commander of the Chinar Corps.

"Our focus is clear on counter-terrorism operations. We are very clear that anyone who enters Kashmir valley will not go back alive," Dhillon said.

Dhillon was holding a press conference a day after the Pinglan encounter in which the authorities said the mastermind of the Pulwama attack had been killed.

Over 40 CRPF personnel lost their lives in the Pulwama attack after a local youth, Adil Ahmad Dar, rammed a car laden with explosives into a bus ferrying CRPF personnel. The bus had been part of a convoy of 78 vehicles transporting 2,500 CRPF personnel from Jammu to Srinagar.

The attack was later claimed by the terror group the Jaish-e-Mohammed.

On Tuesday, Dhillon said that the security forces had "eliminated" the JeM leadership in the valley in less than a 100 hours since the attack.

He added that "there is no doubt that Pakistan Army and ISI is involved. JeM is a child of the Pakistan Army."

Kanwal Jeet Singh Dhillon, Corps Commander of Chinar Corps, Indian Army: Anyone who has picked up a gun will be killed and eliminated. pic.twitter.com/hFFuzLSnLn

Kashmir Inspector General of Police SP Pani, who was also present at the conference, said there had been a "significant dip" in recruitment to the terror ranks in recent months.

"We have not see any recruitment in the last three months. The families are playing a huge role in this. We would like to urge the families and the community in curtailing recruitment," Pani said.

Dhillon also struck a softer note Tuesday asking Kashmiri mothers to "request their sons who've joined terrorism to surrender and get back to mainstream".

"Anyone who has picked up gun will be killed and eliminated unless he surrenders," he added.

The CRPF's Zulfiqar Hasan meanwhile added that their Madadgar helpline (14411) had been coming to the aid of Kashmiris "across the country". A number of Kashmiris, especially students studying elsewhere in the country, have been threatened after the Pulwama attack.

"Lot of Kashmiri students have approached this helpline for help all over the country. All Kashmiri children studying outside have been taken care of by security forces," Hasan said.