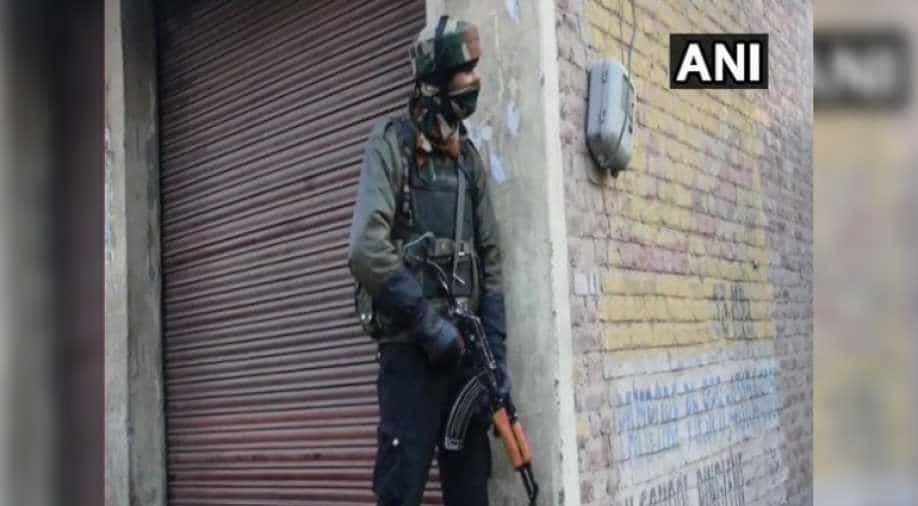 An Indian Army soldier is seen near the encounter site. Photograph:( ANI )

Two terrorists — Hilal Ahmad and Kamran Hilaal — were killed in the encounter. Authorities believe Kamran Hilaal, who they say is a Pakistani official, was the mastermind of the Pulwama attack.

The mastermind of the Pulwama attack has been killed in an encounter in the Pinglan area of Pulwama.

The firefight between the security forces and the terrorists broke out early Monday morning, at about 2 am, after the forces received a tip-off about the presence of terrorists in the area.

A joint team of the Army's 55RR, CRPF and SOG Pulwama launched cordon and search operation in Pinglan area.

Two terrorists — Hilal Ahmad and Kamran Hilaal — were killed in the encounter. Authorities believe Kamran Hilaal, who they say is a Pakistani official, was the mastermind of the Pulwama attack.

Four Indian Army soldiers including a major were also killed in the gun battle.

So was a civilian, who authorities said was killed in the crossfire.

"As the searches were going on, terrorists from inside the target house fired indiscriminately on the search party. In the initial burst of fire four army jawans and one civilian sustained critical gunshot injuries. They were evacuated to hospital for medical attention. Consequently, four injured jawans attained martyrdom and the civilian also succumbed to his injuries," J&K police said in a press release.

#WATCH Police in #Pulwama appeals to locals to leave the site of Pulwama encounter. Four 55 Rashtriya Rifles personnel have lost their lives & one injured and two terrorists neutralised in the ongoing operation. (Visuals deferred by unspecified time) #JammuAndKashmir pic.twitter.com/q2X13OitXX

Union Home Minister Rajnath Singh on the ongoing encounter in #Pulwama, J&K: The morale of the security forces is high. They are being successful in neutralising the terrorists. pic.twitter.com/21DHSFB7CS

Monday's encounter comes only three days after the Pulwama attack.

A local youth, Adil Ahmad Dar, had last Thursday rammed a car laden with explosives into a bus ferrying Central Reserve Police Force personnel. The bus had been part of a convoy of 78 vehicles transporting 2,500 CRPF personnel from Jammu to Srinagar.

Thursday's attack was claimed by the Jaish-e-Mohammed.

The Jaish is headed by Masood Azhar, a Pakistani national. Azhar was one of the three terrorists released by India after the hijacking of Indian Airlines flight IC 814 in December 1999.

Since the attack, India has raised customs duties on Pakistani imports to 200%, thereby making trade with its neighbour virtually impossible.

Prime Minister Narendra Modi had said after the attack that he has given the security forces a free hand to respond to the perpetrators of the attack, at a time and place of their choosing.