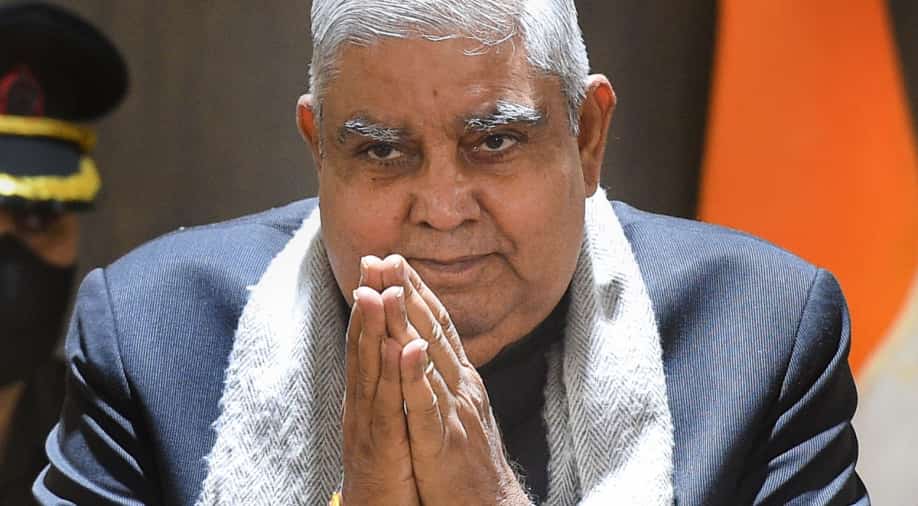 The NDA-backed candidate won the poll by 346 votes. Dhankhar received support from MPs from both houses of the parliament including those belonging to NDA and a number of regional parties, namely YSRCP, BJD, TDP, BSP, AIADMK and the Shiv Sena.

Jagdeep Dhankhar was elected the new vice president of India after winning the election by a landslide margin against the opposition candidate Margaret Alva on Saturday. The NDA-backed candidate won the poll by 346 votes.

Dhankhar received support from MPs from both houses of the parliament, including those belonging to NDA and a number of regional parties, namely YSRCP, BJD, TDP, BSP, AIADMK and the Shiv Sena.

“NDA candidate Jagdeep Dhankar won by 346 votes as he bagged 528 of the total 725 votes that were cast. While 15 votes were termed invalid, the Opposition candidate Margret Alva received 182 votes in the election," said Lok Sabha Secretary General Utpal Kumar Singh, who was also the returning officer for the polls.

The opposition candidate never looked in a position to win the election and Alva’s campaign was affected further by TMC’s decision to abstain from voting citing absence of understanding.

Born in 1951, Dhankhar graduated in physics from Maharaja's College in Jaipur and went on to get his LLB degree from Jaipur University in 1978-79. After finishing his education, he enrolled with the Bar Council of Rajasthan and made his career as an advocate. He ended up practicing law in Rajasthan High Court before getting elected to Lok Sabha from Jhunjhunu in Rajasthan in 1990.

In his political career, he went on to become a Union Minister in 1990 and also a Minister of State for Parliamentary Affairs. He was also a member of the Vidhan Sabha from 1993 to 1998.

While he joined Congress during PV Narsimha Rao’s stint as the prime minister, he came back to the BJP due to his connections with Vasundhara Raje and other prominent members of the party.

Dhankhar was till recently the Governor of West Bengal but since his appointment in 2019, he had been at loggerheads with chief minister Mamata Banerjee. Over the last three years, the two clashed publicly and Dhankhar openly criticised the state government for law-and-order problems.