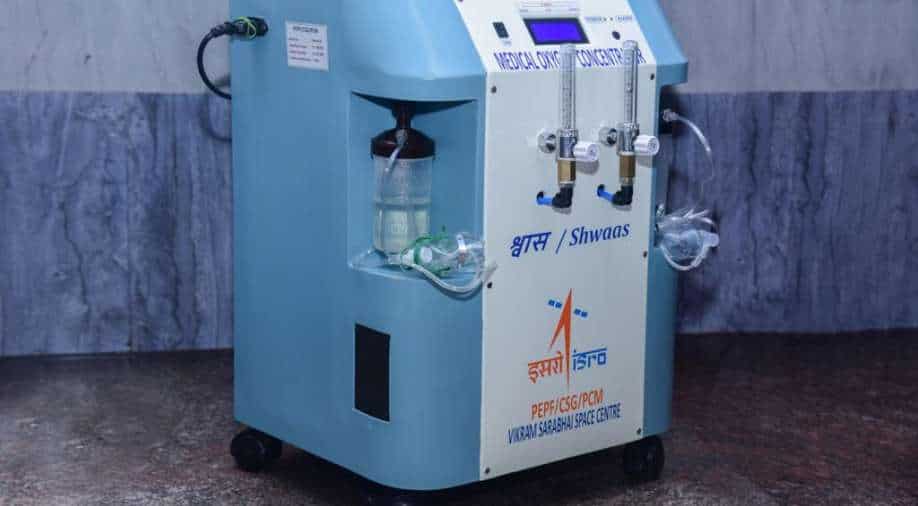 The portable Medical Oxygen Concentrator (MOC) named "SHWAAS", which can deliver over 95 per cent enriched level of oxygen to support patients with respiratory illness or who are on oxygen therapy.

The Indian Space Research Organization(ISRO) is inviting applications from entrepreneurs and industries to mass manufacture oxygen concentrators that were developed in-house.

It comes at a time when the country is having to import various kinds of medical equipment and oxygen cylinders to bolster the fight against COVID-19.

ISRO’s Vikram Sarabhai Space Center(VSSC), which is the country’s lead centre for the development of rockets and related technologies has invited applications and shared the specifications of their product on their website.

The portable Medical Oxygen Concentrator (MOC) named "SHWAAS", which can deliver over 95 per cent enriched level of oxygen to support patients with respiratory illness or who are on oxygen therapy.

The device enhances the oxygen gas content by selectively separating the nitrogen gas from ambient air through Pressure Swing Adsorption (PSA). SHWAAS is capable of supplying enriched oxygen continuously at10 LPM adequate for two patients at a time, said the post on ISRO’s website.

Zee Media had earlier reported on how ISRO is contributing to the country’s COVID-19 battle by scaling up its production of liquid oxygen, repurposing giant fuel tanks across India to store liquid oxygen, in-house development of medical technologies among others.

“These medical equipment are not under our area of work, it requires a deep understanding of human physiology, breathing etc.. Such devices aiding respiration must be able to sense, sync with unique breathing patterns and assist Doctors in saving lives. So, our young engineers, most of whom are in their 20s and 30s studied the theory and explored the processes to make this happen," Dr.S. Somanath, Director, VSSC had told Zee media earlier.

"It was a collaborative effort between several teams largely working from home and partly from labs, under the guidance of seniors and technicians. Ours is a highly inspired work culture, it’s not just about building rockets, we are ready to take on any challenge with our enthusiasm and ideas” Dr Somanath added.