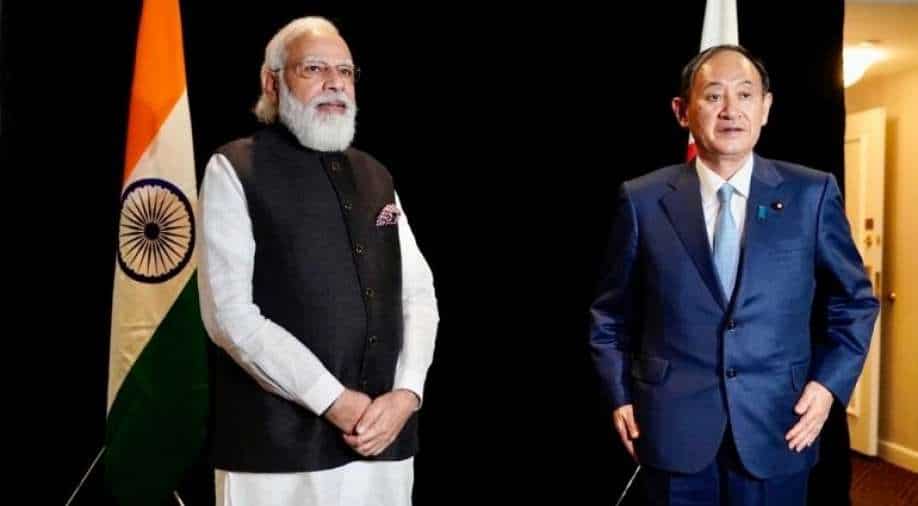 During a meeting in April, Modi and Suga emphasised the importance of collaborating to construct resilient, diversified, and trustworthy supply chains, secure a stable supply of vital materials and technology, and form new manufacturing and skill development partnerships.

In Washington, Indian Prime Minister Narendra Modi and his Japanese counterpart Yoshihide Suga held a "fruitful" meeting where they addressed a variety of topics, including how to boost trade and cultural connections.

Both leaders also discussed how to strengthen bilateral strategic ties ahead of US President Joe Biden's first-ever in-person Quad summit.

"Furthering friendship with Japan. Prime Ministers @narendramodi and @sugawitter had a fruitful meeting in Washington DC. Both leaders held discussions on several issues including ways to give further impetus to trade and cultural ties," the Prime Minister's Office (PMO) tweeted.

Prime Ministers @narendramodi and @sugawitter had a fruitful meeting in Washington DC. Both leaders held discussions on several issues including ways to give further impetus to trade and cultural ties. pic.twitter.com/l370XzB1Yt

This was also PM Modi's first face-to-face encounter with Suga since the latter succeeded Shinzo Abe as Prime Minister in September of last year.

The bilateral meeting takes place a day before the Quad's first in-person summit, which brings together Australia, India, Japan, and the United States.

PM Modi and Suga spoke on the phone in April and discussed cooperation in a variety of areas, including high technology, skill development, and battling the COVID-19 epidemic.

Suga had previously cancelled a trip to India planned for the end of April due to the coronavirus outbreak.

Modi hailed Suga as a very straightforward person after virtually inaugurating a Japanese Zen garden and Kaizen Academy established up on the premises of the Ahmedabad Management Association (AMA) officially June.

Quad will be the first time the leaders of Australia, the United States, Japan, and India meet in person.

They'll meet in the White House, with all of the United States' military strength, friendly diplomacy (and possibly pressure) on display.

At the Quad, India and Japan are likely to face additional pressure to strengthen their role in discouraging China.

Despite the fact that the four nations have worked hard to avoid the Quad being perceived as a strategic alliance, that has been the underlying aim, and India and Japan will be questioned about their future roles.

This region's new buzzword is "deterrence," and it's all about China.

China's perceived threat to maritime security in the Indo-Pacific area is the Quad's main worry.

Beijing has constructed military bases on reclaimed islands in the South China Sea, a vital global waterway and trading route.

Members of the Quad regard this as a possible danger to free commerce and travel.

And each of the four Quad countries has its own concerns with Beijing.