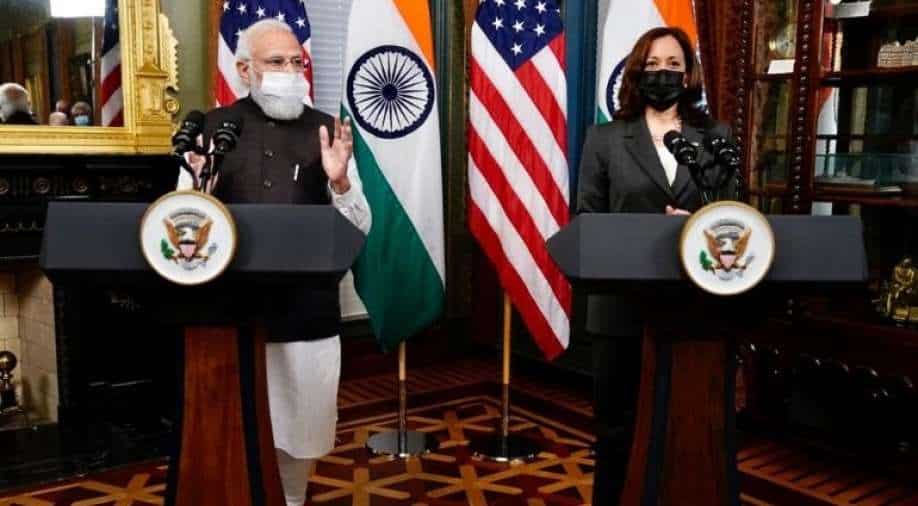 This was PM Modi's first in-person meeting with Harris after she made history by becoming the first Indian-origin person to become the Vice President of America.

During their meeting at Washington DC, Modi invited Harris to visit India.

In a joint appearance with Modi, Harris said India is a vital companion of America.

Modi said in his address, "I applaud America for assisting India when it was in the grip of the second wave of COVID-19."

Harris said: "When India was hit by a COVID outbreak, the US was happy to assist India in meeting its need and fulfilling its responsibility to vaccine its citizens...India was an important source of vaccines for other countries early in the pandemic."

On COVID-19, "our nations have worked together. Early in the pandemic, India was a vital source of vaccines for other countries, "the US vice president said.

Tête-à-tête between PM @narendramodi and @VP Kamala Harris before commencing delegation level talks. This is their first in-person meeting. pic.twitter.com/siKcVe88c3

She also noted India's exceptional pace of vaccination given its vast population. She said, "I welcome India's announcement that it will soon be able to resume vaccine exports. It is particular note and admiration that India, I'm told, is currently vaccinating approximately 10 million people a day as of today."

The two leaders also stressed "the importance of our shared belief in a free and open Indo-Pacific region."

"I know that India takes the issue of the climate crisis seriously," Harris said. "We believe that working together, the United States and India can have a profound impact not only on the people of our respective countries, but on the entire world."

"When you and I last spoke in June, we talked about how our world is more interconnected and interdependent than ever before...and the challenges that we face today have highlighted that fact," says US V-P Kamala Harris, welcoming Indian PM @narendramodi pic.twitter.com/zODgjDZCCr

Earlier in June this year, PM Modi held a telephonic conversation with Harris and discussed the US' strategy for global vaccine sharing and the Quad vaccine initiative to fight the COVID-19 pandemic.

Harris' mother, Shyamala Gopalan, was born in the southern Indian state of Tamil Nadu and immigrated to the United States as a teenager where she met Harris' father, Donald Harris, an immigrant from Jamaica.

Harris' maternal grandfather, PV Gopalan, had participated in the Indian independence movement and would later go on to become a senior civil servant in the country, at one point serving on an Indian diplomatic mission to Zambia.

Mukesh Aghi, President and Chief Executive Officer of the US-India Strategic Partnership, explained why the meeting between the two leaders is crucial.

He said Harris is quite powerful within the administration and the connection between the two is going to help both countries in the short and long term.

In his remarks at their meeting, Modi said: "The vibrant and strong people to people connections between India and the US is a bridge between our two countries, their contributions are praiseworthy."

He noted that India and America are "natural partners", adding "we have similar values, geopolitical interests, and our coordination and cooperation is also increasing."

"Your election as Vice President of USA has been an important and historic event," he told Harris. "You are a source of inspiration for many across the world. I am confident that under President [Joe] Biden and your leadership our bilateral relations will touch new heights."

"I express my gratitude to the US for extending a helping hand to India when India was hit by the second wave of COVID19," Modi said in the joint statement with Harris.