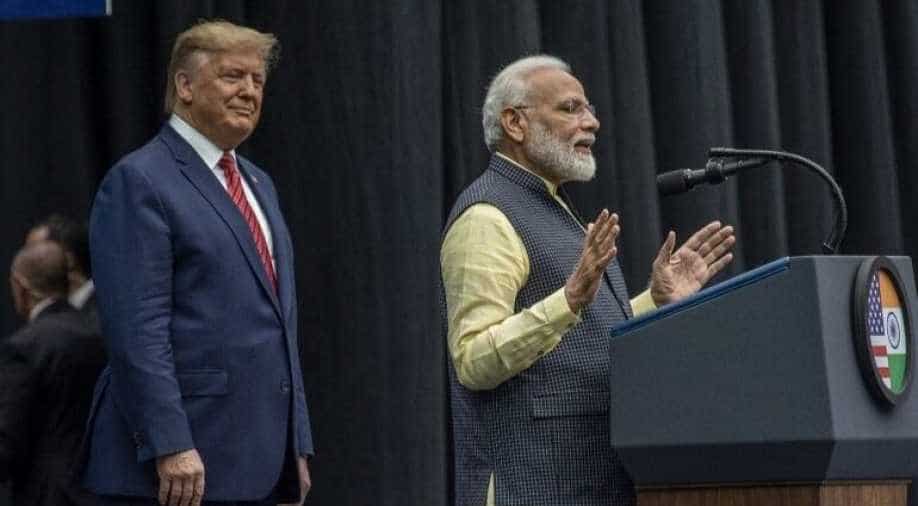 PM Modi asked the congregation to give a standing ovation to Indian parliamentarians for repealing Article 370 through Parliamentary action.

In front of a plethora of US Leaders and President Donald Trump himself, Prime Minister Narendra Modi firmly reiterated that his government's move to bid farewell to Article 370 was aimed at ending 2 things - discrimination and terrorism.

Addressing the “Howdy, Mody” event in Houston, Prime Minister Modi told the crowd to give a standing ovation to Indian parliamentarians for ensuring the nod to repeal key provisions of Article 370 that deal with Jammu and Kashmir.

The prime minister counted the move in Jammu and Kashmir as one of the major achievements of his government within its first 100 days.

He said that Article 370 had kept people of Jammu and Kashmir and Ladakh away from the development and equal rights.

"Separatist leaders and terrorism were taking advantage of this situation. Now, the people there are getting the same rights as enjoyed by the rest of the nation," PM Modi added.

The issue of abrogation of article 370 had also resonated in the US. With President Trump too making a mention.

New Delhi had given a firm reminder that the Kashmir issue was a bilateral one between India and Pakistan and the current changes were part of an effort to bring development to the state where terrorism had flourished.

Launching a scathing attack at the Imran Khan government which has been flagging Kashmir at various international forums - including the United Nations, PM Modi said that 'What India is doing has troubled some people who can't even manage their own country'.

This remark drew loud cheers from the audience at the event.

Without naming Pakistan again - the Prime Minister said that one country (Pakistan) has made its hatred towards India the centre of their agenda.

Ever since Modi government stripped Jammu and Kashmir of its special status, Pakistan has left no stone unturned to internationalise the issue.

However, to its embarrassment, Islamabad failed to garner support from the international community. Several countries, including the USA, have dubbed abrogation of article 370 as India's internal matter.