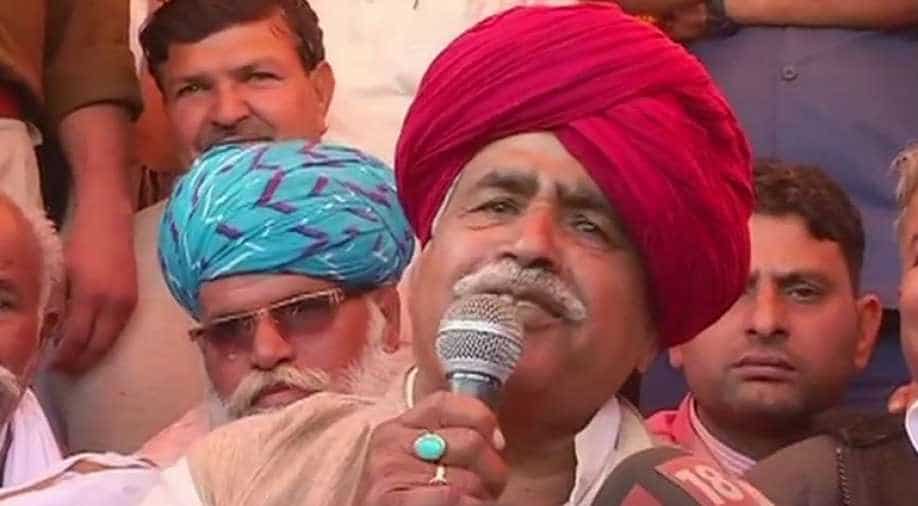 'The government has accepted our demands. We are calling off the protest,' said Gujjar leader Kirori Singh Bainsla.

The Gujjar community called off its 'rasta-roko' dharna at Sawai Madhopur district in Rajasthan on Saturday.

“The government has accepted our demands. We are calling off the protest,” said Gujjar leader Kirori Singh Bainsla.

For the last ten days, Rajasthan has been witnessing a string of protests by the Gujjar community.

The protest, led by Bainsla, had affected the movement of trains in the region as agitators squatted on rail tracks in a bid to push their demand.

Gujjar leader Kirori Singh Bainsla: The agitation concludes today in the interest of the nation. I request that all the blockades across Rajasthan be removed immediately. pic.twitter.com/X1JGpGHzxc

A bill was passed in the Rajasthan assembly on Wednesday earmarking five per cent reservation for the community in government jobs and educational institutions.

Rajasthan`s Deputy Chief Minister Sachin Pilot had said, "I want to congratulate Rajasthan government as we have passed the Gujjar reservation bill. The Gujjar community was waiting for so long. It is a historic moment for us."