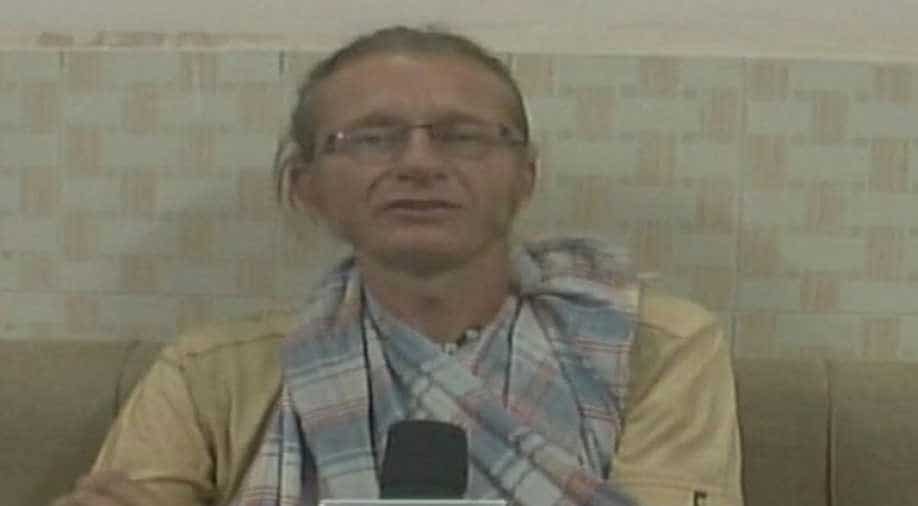 The Railway employee said it was Holger Eric who had attacked him. Photograph:( ANI )

The German tourist who alleged that he had been attacked by a Railway employee in Robertsgang in Uttar Pradesh has said he will try and approach External Affairs Minister Sushma Swaraj for help.

"Police have seized my passport, and without it I cannot leave India. Looking for means to approach Mrs Sushma Swaraj for help," Holger Eric told ANI.

Police have seized my passport, and without it I cannot leave India. Looking for means to approach Mrs Sushma Swaraj for help: Holger Eric

"The time the incident took place I was at a tea stall having tea when the man, in an inebriated state, approached me aggressively. I pushed him away, but he came back after a few minutes with a wooden log and attacked me on my shoulder, which broke my collarbone. I currently can`t move my arm and I also have injuries all over my body.  I`m currently looking for means to approach External Affairs Minister Sushma Swaraj for help and support," Eric added.

The incident took place on Saturday with police first saying the railway employee, Aman Kumar, had attacked Eric when he did not reply to his greeting of "Welcome to India".

Also read: Days after attack on Swiss couple, German tourist assaulted in UP

Kumar however told police that it was Eric who attacked him first, and that he even spat in his face when he wished him "Welcome to India'.

The two of them have filed cases against each other.

News reports since then however have quoted the police as saying Eric might have anger issues.

"He may have anger management issues, depression," the Times of India reported a senior UP police officer as telling reporters in Lucknow. "He was aggressive with a railway supervisor who intervened too... and later, the police post in-charge."

The news reports added that Eric had got into scuffles earlier too.