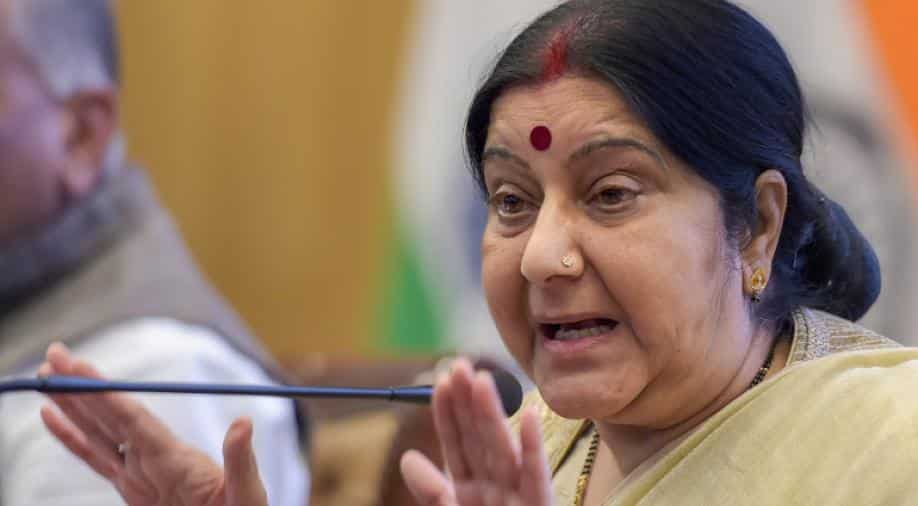 S Jaishankar, the incumbent foreign minister, who succeeded Swaraj earlier this year, said he was shocked to know about her untimely demise and was 'difficult to accept the news'.

Condolences began pouring in from foreign dignitaries and others following the demise of former external affairs minister Sushma Swaraj who passed away due to cardiac arrest on Tuesday night.

The 67-year-old BJP veteran was admitted to All India Institutes of Medical Sciences (AIIMS) following a deterioration in her health.

She passed away after suffering a cardiac arrest.

S Jaishankar, the incumbent foreign minister, who succeeded Swaraj earlier this year, said he was shocked to know about her untimely demise and was "difficult to accept the news".

"Deeply shocked to learn of the passing away of Smt Sushma Swaraj. Difficult to accept this news. The whole nation grieves, the Foreign Ministry even more so," he tweeted. Former Minister of State (MoS) for external affairs VK Singh who worked with Swaraj in the ministry during the first term of the Narendra Modi government, said her demise brought the curtains "down on one of the most prolific and illustrious political figures of India".

"The demise of Sushma ji, brings the curtains down on one of the most prolific and illustrious political figures of India. Her exemplary insights, understanding & visionary leadership will be missed by one and all," he said in a series of tweets.

Lauding her for her outreach to the Indian diaspora, the former Army General said, "I was fortunate enough to work with her during the last term of our government. It was her witty comebacks & empathetic attitude towards every Indian who faced issues when travelling abroad that made her one of the most loved EAMs of India."

"Sushma ji, thank you for everything that you did for our country & for the memorable times I spent working with you - you will be missed, ma'am. Rest In Peace," Singh said in another tweet. India's Ambassador to the UAE Navdeep Suri too tweeted his condolences, describing Swaraj as an "inspirational leader".

"Just devastated to learn about the untimely demise of #SushmaSwaraj. She brought a rare empathy and a personal, human touch to the world of diplomacy and there is just so much that we learned from her. A truly inspirational leader," he tweeted.

The Indian envoy also recalled his post-midnight session with Swaraj in Abu Dhabi when the latter had arrived there as a 'Guest of Honour' to deliver the OIC Foreign Ministers' Conference.

"Remembering our 2 AM session with #SushmaSwaraj in Abu Dhabi on March 1. She was to speak the next morning as Guest of Honour at OIC Foreign Ministers' Conference. Arrived after midnight, plunged straight into work, got a bit of rest and delivered a truly memorable address," Suri said in another tweet.

Terming Swaraj as one of India's most respected leaders, Ambassador of France to India Alexandre Ziegler lauded her for taking Indo-French bilateral ties to "new heights".

"My heartfelt condolences to the family & loved ones of former EAM of India, Sushma Swaraj ji. One of India's most respected leaders, she showed remarkable dedication to serving her fellow citizens & took the Indo-French relationship to new heights," Ziegler tweeted.

Bhutan's Foreign Minister Dr Tandi Dorji also paid his tributes to the former minister."Deeply saddened to learn of the demise of Smt Sushma Swaraj, former External Affairs Minister of India. Our deepest condolences and sympathies to the people of India and the bereaved families. #@RuchiraKamboj," he said.

Afghan Foreign Minister Salahuddin Rabbani also tweeted, "I'm saddened to hear of the untimely demise of @SushmaSwaraj, Senior BJP leader & former Foreign Minister of India. My deepest condolences to the people & government of India on the loss of a distinguished public figure who represented her country with distinction & determination."

Former Afghan President Hamid Karzai remembered Swaraj as a tall leader and great orator. "Deeply saddened to hear of the loss of Behinji Sushma Swaraj. A tall leader and a great orator and people's person. My profound condolences to the people of India and her family and friends," he tweeted.

Maldives' Foreign Minister Abdulla Shahid also recalled his "good friend" Swaraj, describing her as a warm human being and the key architect of renewing bilateral ties between the two countries.

"Deeply grieved to hear the demise of my good friend Smt #SushmaSawraj; Stateswoman extraordinaire, diplomat par excellence; A warm human being. Key architect of renewed Maldives-India friendship. Sincere condolences to the bereaved family and people of India. May she rest in peace!" he tweeted.

"Sad and shocking news. A great leader and wonderful minister that inspired all of us who had the honour to serve under her leadership," India's Ambassador to US Harsh V Shringla also wrote on his Twitter handle.

India's High Commissioner to Canada Vikas Swarup said he was stunned to hear Swaraj`s demise and stressed that her legacy of making the ministry as "people-centric" will live on forever.

"Stunned to hear that @SushmaSwaraj is no more. I had the privilege of working with her very closely. She touched millions of people with her kindness, her generosity & her service. Her legacy of making MEA a "people-centric" Ministry will live on forever. Truly a very sad day," he tweeted.

Former Canadian Prime Minister Stephen Harper also expressed his condolences."Saddened to learn of @SushmaSwaraj's passing. Throughout her long and inspired service to the Indian people, she brought wit, warmth and strength in her many distinguished roles. Respected by all, she will be deeply missed and forever admired," he tweeted along with a picture of his meeting with Swaraj.

A team of doctors tried to revive her for 70 to 80 minutes but failed in their attempt. Swaraj was declared dead at 10:50 pm.

Swaraj was appointed the foreign minister in the first term of Modi government in 2014.

She opted out of the 2019 Lok Sabha elections citing health reasons.

During her tenure, the BJP leader had been active and popular on Twitter reaching out to the Indian diaspora in distress for assistance.