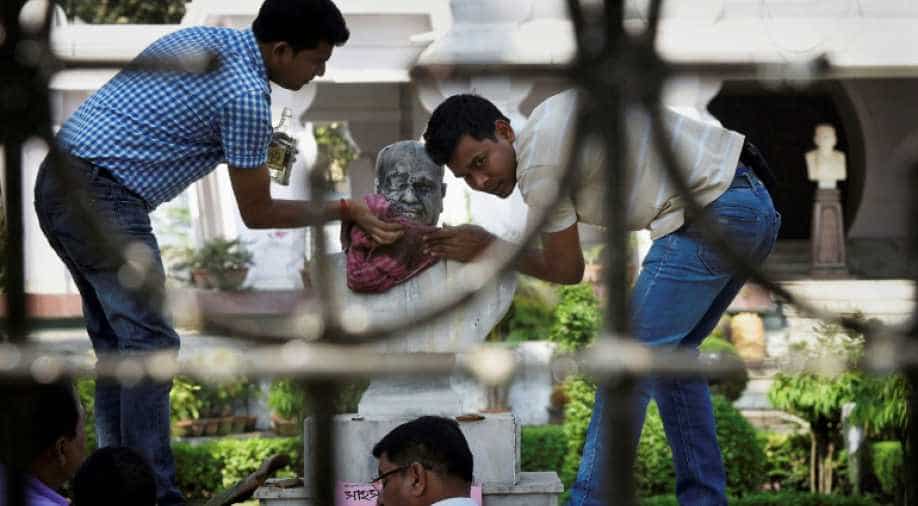 Police officials along with a group of people clean the bust of Bharatiya Jana Sangh Bharat Keshri's founder Dr. Syama Prasad Mukherjee after it was vandalized by unknown people at Keoratola Mohasoshan in Kolkata. Photograph:( PTI )

On Tuesday, the legacy of the Soviet leader in India received a disturbing jolt when a statue of his in Belonia town of Tripura was razed by an enthusiastic crowd of BJP supporters amid cries of “Bharat mata ki jai.”

Three people have been arrested over the last 48 hours in Tripura, for what the police has described, as "post-poll' violence.

The incident resulted in widespread condemnation from all corners of the country.

The violent act by the BJP workers which swept to power in the Communist citadel resulted in sporadic incidents of violence and statues of several leaders being vandalised.

A statue of Periyar was vandalised hours after a BJP leader suggested it in a controversial Facebook post responding to anger over Lenin statues being razed in Tripura.

''One incident of vandalism cannot be replied with another similar incident, we condemn both. We have arrested six people and we will repair it(SP Mukherjee's bust in Kalighat) as well,'' said Sovandeb Chattopadhyay, the chief whip,  Trinamool Congress.

Syama Prasad Mukherjee is a patriot who laid his life for the nation. He is the son of West Bengal. Those guilty should be arrested immediately. CM Mamata Banerjee should punish those who vandalised his statue, said Sidharth Nath Singh, West Bengal BJP in-charge. ''We strongly condemn this incident,'' he added.

Meanwhile, a Public Interest Litigation (PIL) was filed in Madras High Court by advocate Surya Prakasam in wake of BJP leader H Raja's FB post on Periyar's statue. Court has agreed to hear the case in the afternoon.

''I have removed that admin who posted the comment about Periyar and have deleted the post. I totally condemn vandalizing statues and violence. I express heartfelt regret for my Facebook post,''H Raja said.

The recent issue of destroying of statues is extremely unfortunate. We as a party do not support the bringing down of anybody’s statue, he tweeted from his official Twitter handle.

Shah also promised severe action against those involved in such hooliganism.

''I have spoken to the party units in both Tamil Nadu and Tripura. Any person associated with the BJP found to be involved with destroying any statue will face severe action from the party,'' Shah stated in another tweet.