Picked a lot of things from Amitji: Rishi Kapoor on working with Amitabh Bachchan in '102 Not Out' 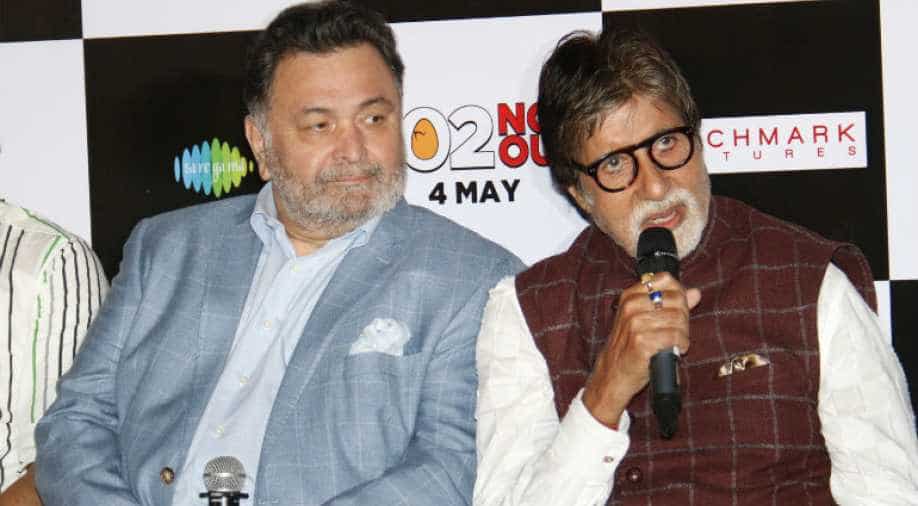 Rishi Kapoor and Amitabh Bachchan during the song launch event of their upcoming movie '102 Not Out'. Photo by Yogen Shah Photograph:( WION Web Team )

More than four decades after he made his debut with the blockbuster teen romance "Bobby", veteran actor Rishi Kapoor says he now has the freedom to explore his characters and is no longer bracketed in an image.

The actor, 65, who mostly played the romantic hero in his youth, has transitioned into strong character roles, be it the endearing school teacher of "Do Dooni Chaar", the merciless human trafficker of "Agneepath" or the cantankerous 70-year-old son of a centenarian father in his new film "102 Not Out".

"I always try to be different and play varied kind of characters. I am not stagnating in one kind of an image. I am an actor who is doing his job. I am not making a career for myself. What safe (roles) can character actors play? They don't matter at all," Kapoor told PTI.

The actor believes content has become king in cinema today, which he says is a wonderful sign for both the industry and audience.

"Those hackneyed plots are not going to be accepted. It is a healthy thing that actors of my age are getting work today. I am not a young actor. People want to see different kind of films, they are fed up of seeing same formula.

"This is the era of actors now, non-actors are not going to survive. They maybe there for one or two films but if you are not competent enough you cannot survive," he added.

The actor says he will not sign a film if it does not offer something new and challenging.

Kapoor has been a part of Hindi cinema for 45 years but his passion for films has only increased with years.

"I love my work. I am born and brought up into a family of cinema, family of actors. I only know how to act, I don't know anything else. I have been working for 45 years and I have done over 150 films. I am thankful to God that I get paid very much for what I love very much."

What intrigued Kapoor the most about Umesh Shukla directed "102 Not Out" is that the film is about a father-son relationship told in an entertaining way.

"It's a very different story about a 102-year-old man who has a 75-year-old son. I would imagine a son sending his father to old-age home, but here circumstances are such that the father wants to send his son to an old-age home," he said.

Kapoor says it is always a privilege to work with Amitabh Bachchan, who he has reunited with after 27 years.

"Mr Bachchan is a very loved and senior actor... He is the commanding superstar of our industry. And a wonderful actor and colleague to work with."

The two started working together more than 40 years ago with "Kabhi Kabhie" and the last film they did together "Ajooba" 27 years ago, he said.

Kapoor calls himself a "student of cinema" who is always learning something, be it from older or junior actors.

"I picked up lot of things when I worked with Amit ji. The way he romances his role, the way he flirts with his role and gets into the character that is something I observed.

"He lives the character when he is working in that film. It is tremendous. I appreciate that he gives so much of his best even at this age."